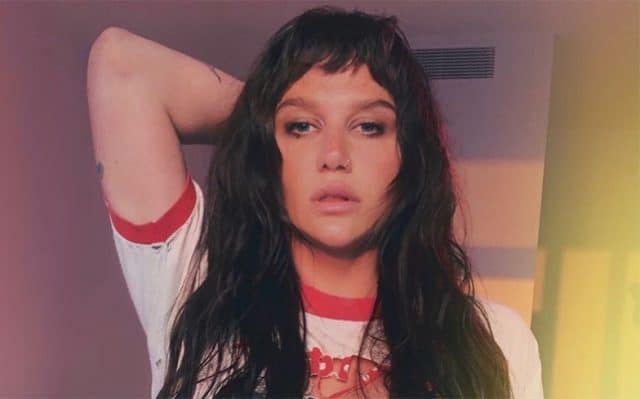 The politically-charged track imagines a world where the titular group of people didn’t rule the world anymore – a world where everyone has healthcare, everyone can go to college for free, and women have autonomy over their bodies.

“If you are a boy who loves a boy, you’ll get a wedding cake and all,” she sings on the second verse, before making a specific dig at President Tr*mp with the lyric: “If you’re from another land, then come here, you won’t have to climb a wall.”

The message of the song – the importance of equality – is best summed up by the bridge: “Twinkle, twinkle little star, how I wish the world was different, where who you love and who you are was nobody’s fucking business.”

In a post on Instagram, Kesha appeared to suggest that she ‘leaked’ the song herself, asking her record label RCA Records to make it available on  streaming services like Spotify and Apple Music.

“Hey guys sooo I hear you!! That you want my new song Rich, White, Straight, Men on streaming services… not sure how to do that personally – maybe RCA Records will help me if [they’re] not too mad about me leaking it,” she wrote.

“What else do they expect from me at this point lol.”

In 2017, Kesha released her third studio album Rainbow, which was widely regarded by fans and critics as her best record yet. She later contributed a song to The Greatest Showman soundtrack alongside Keala Settle and Missy Elliott.

In recent years, Kesha has started to use her voice for political change. Last year’s Here Comes The Change, taken from biopic On The Basis Of Sex, saw the singer-songwriter call for a day where “everyone’s equal” and warn those against equality: “This is not a phase, here comes a change.”

The uplifting song was also accompanied by a lyric video starring a diverse cast of individuals promoting peace, and even featured a same-sex wedding between two men – unsurprising, given Kesha’s long-standing support of the LGBTQ community.