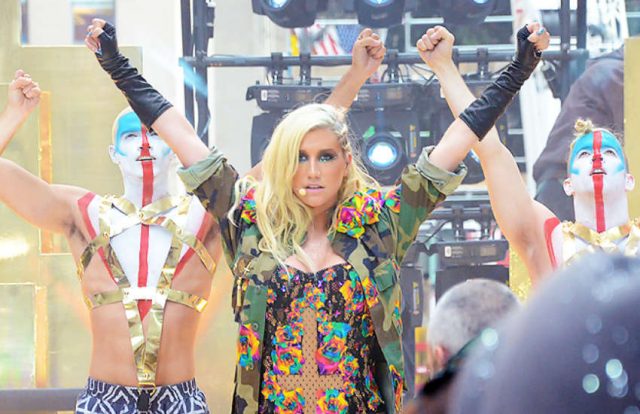 Kesha is taking aim to at the most powerful people in our society via her new song, Rich, White, Straight, Men.

In the song, she imagines a world where rich, white, straight men ‘didn’t rule the world’.

The 32-year-old singer imagines a world with universal healthcare, womens’ autonomy of their own bodies, anti-discrimination laws for LGBTI people, equal pay for women, refugees and free college tuition.

She sings in one line: ‘If you are a boy who loves a boy, you’ll get a wedding cake and all.’

Then a man’s voice chimes in: ‘Not in Colorado!’

It’s a reference to the US Supreme Court’s decision to allow a baker to refuse to make a cake for a gay wedding in Colorado.

Kesha sings in another part of the song: ‘Twinkle, twinkle little star — how I wish the world was different. Where who you love and who you are was nobody’s fucking business.’

‘I just got a mix of a song,’ she said in her Instagram story this week. ‘And I just don’t want it to sit on my computer.’

She then added: ‘So I kind of want to share a part of it.’

has not yet announced whether she will be releasing an official music video for the song. As it currently stands, the video she posted features her holding up her middle finger, on loop.

Kesha will be LOVELOUD’s headlining act at the end of the month.