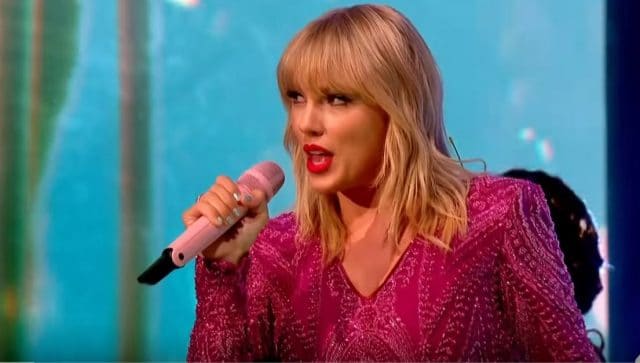 Right-wing radio host and Colorado-based pastor Kevin Swanson, who has previously said that Christians should attend gay weddings and hold up signs telling the newly married gay couples that they “should be put to death,” warned Taylor Swift that “God will cut her down” for embracing the LGBTQ community, reports Right Wing Watch.

The radical anti-LGBTQ preacher took issue with Swift’s new music video, “You Need to Calm Down,” which includes a shout-out to inclusion and encourages viewers to a sign a Change.org petition supporting the Equality Act, a bill which would enshrine protections for LGBT Americans in federal law.

“Taylor Swift, most popular female singer in America today, released a song promoting the Leviticus 16 list of abominations, pretty much,” he said, citing a Bible passage about animal sacrifices. “‘You Need to Calm Down’ is the name of the song, and she’s apparently telling God to calm down about all of his ethical concerns. I don’t think it’s going to be effective, but that’s what she’s doing.”

Swanson added that the Equality Act is “intended to persecute Christians if they don’t want to celebrate homosexual, heathen rites and rituals.”

“So what do we say to Taylor Swift and her new concoction, ‘You Need to Calm Down’?” Swanson asked his listeners. “I think we just tell Taylor Swift that she’s a fool. That she doesn’t fear God, and sooner or later, God will cut her down.”

He also called Swift “a sinner in desperate need of a savior.”

After the Supreme Court legalized marriage equality in 2015, Swanson compared same-sex marriage to “marriage to pets.”

“The church shouldn’t recognize… when a man comes in with his pet sheep or his pet dog and says, ‘This is my wife,’” he told his listeners. “The church says, “No, that’s illegitimate. That is treason against Almighty God.”

“There are instances in which both the Old and New Testament speak to the matter with unbelievable clarity. You know what that sin is—it’s the sin of homosexuality. In fact, in Romans 1, Paul affirms that this particular sin is worthy of death. The Old and New Testament, I believe, both speak with authority and we ought to receive it.”

Swanson also claimed he’d wear sackcloth and ashes if one of his sons married another man.

“I’d sit in cow manure and I’d spread it all over my body,” he told attendees. “That is what I would do and I’m not kidding, I’m not laughing… I’m grieving, I’m mourning, I’m pointing out the problem.”