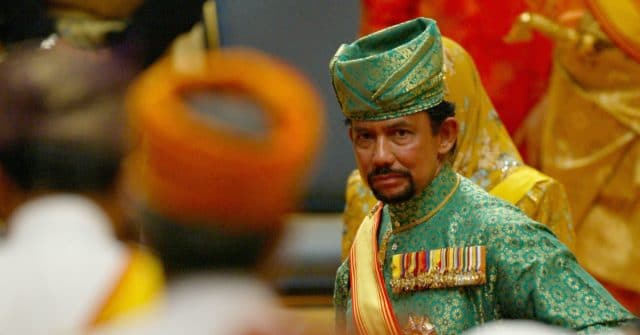 King’s College London has revoked the Sultan of Brunei Hassanal Bolkiah’s honorary degree, saying his willingness to stone LGBT+ people conflicts with the “values and freedoms which are upheld and championed at King’s.”

On May 5, the Sultan announced that he would not enforce the death penalty for gay sex, but the statement issued by the London university on Thursday (June 6) states that the sultan’s willingness to enact this law and other egregious penalties on LGBT+ people “provoked real anguish” within the King’s College community.

The Sultan was awarded an honorary Doctor of Laws in 2011 for his commitment to higher education. The decision to rescind the degree came after considerable pressure from within the university.

King’s LGBTQ+ Staff Network wrote an open letter demanding immediate action from the university. The letter was accompanied by a petition which passed over 5,000 signatures.

Speaking to the BBC on April 3, Georgie Spearing, president of KCL’s LGBT+ Society, said: “It is entirely wrong for our institution to tacitly endorse a man who would have our LGBT+ community at KCL stoned to death.

“A small step in the right direction is to rescind the honours degree, but far more structural changes need to occur to increase the quality of university life for our LGBT+ students.”

Following this the Council of King’s College London initiated a review into the Sultan’s honorary degree. The decision to revoke the degree has now been conveyed to the Sultan and he has been invited to respond.

The Sultan’s decision to enforce draconian laws against LGBT+ people was met with international disapproval, and many celebrities including Elton John, George Clooney and Ellen DeGeneres have since voiced their opposition.

The Sultan’s honorary degree at the University of Aberdeen was revoked on April 17. The university’s principal, George Boyne said: “The introduction by the Sultan of the new Penal Code is contrary to our strong commitment to the value of diversity and inclusion.”

On May 23, the Sultan was forced to return his honorary degree from Oxford University after backlash from students, who started a petition which attracted more than 118,500 signatures.