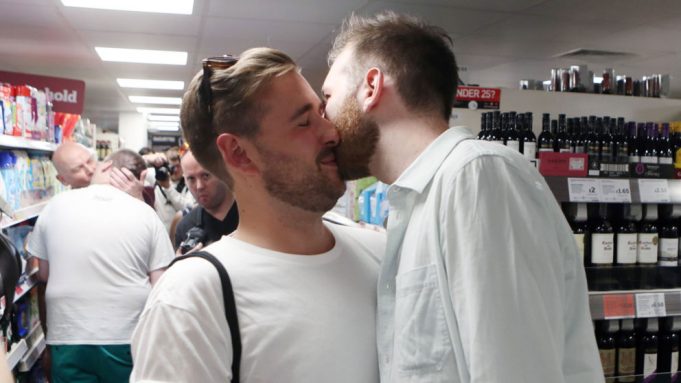 A show of solidarity takes place at a supermarket in east London where two men were told to leave because they were holding hands.

Around 200 protesters have staged a mass ‘kiss-in’ at a Sainsbury’s Local store after a gay couple were told to leave the supermarket by a security guard.

Thomas Rees, 32, and Joshua Bradwell, 25, were ejected from a branch in Hackney, east London, after a customer complained about them holding hands.

On Saturday evening, shoppers appeared puzzled as the scores of gay men and women holding rainbow flags and speaker systems filled the aisles before starting a countdown to the ‘kiss-in’. Mr Rees and Mr Bradwell thanked their supporters and said the number of people who turned out to support them was “absolutely insane”.

Mr Rees added: “We were right to be holding hands because when someone questions your behaviour in such a direct manner you can’t help but analyse how you are perceived by society. “When your community come behind and say ‘you were right and you are right’, all that does is amplify your feelings. We were right to complain and do what we’ve done and fight those people who said we were wrong.”

At least one member of the public shouted at the group to “get off my street”, but the protesters carried on undeterred.

A spokesperson for the store, who laid on biscuits and water for the protesters, said: “It’s been a really great event and an important opportunity for the community to show their support.

“We do our best to make sure everyone feels welcome in our stores but occasionally we make mistakes.

“We are working hard to make sure lessons are learnt.”