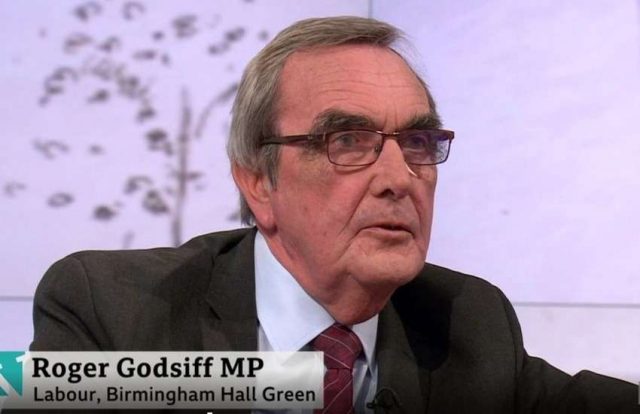 A Labour MP who has openly backed anti-LGBTI protesters in Birmingham, UK, has been slammed after admitting he hasn’t read the teaching materials he’s campaigning against.

Appearing on the political , MP for Birmingham Hall Green Roger Godsiff brought up one text as an example of ‘age-inappropriate’ teaching, before saying he judged this based solely on its cover.

It’s the latest in a swirling debate over a Birmingham school that sought to integrate LGBTI themes into its curriculum.

They claim that the LGBTI-inclusive curriculum, the No Outsiders Program, contradicts Islam. Others argue, such as Godsiff, that the materials are ‘age-inappropriate.’

But as Derbyshire questioned Godsiff on how a child can be ‘too young’ to be aware that queer people exist, the MP focused on allowing parents to define when it is acceptable to bring the topic up.

Derbyshire said this was ‘absurd.’

He then added: ‘I have a three-year-old grandson and if he was hit with the nine characteristics [of the Equality Act] being put in front to him I think he would wonder what’s going on.’

But, as Derbsyshire added, that’s not exactly what happens in the classrooms.

One book on the syllabus, And Tango Makes Three, is designed for elementary school-aged children.

It involves two male penguins in a relationship where a zookeeper gives them an egg to raise together.

However, Godsiff has not read the book. Moreover, when he brings up another text, ‘Why is Gotcha Gay’, Derbyshire has not heard of the book, and asks what it is about.

‘I don’t know, I’ve only seen the front page of the book.’

In other words, Godsiff literally judged a book by its cover.

The No Outsiders program sparked a school boycott and parents withdrawing pupils from classes.

However, this was all over a curriculum that is anti-bullying and LGBTI-inclusive.

But despite support from for the program from the UK , the education watchdog Ofsted, and local politicians, Parkfield suspended it.

This was as a result of the disruption and negative effect the protests had on pupils.

Moreover, the PSHE teacher added: ‘In Britain today, schools have got to find a way to tackle that rise in hate.’

However, while dozens protested, hundreds have sounded out their support of them.

Queer comedian . Writing a letter to Godsiff asking if he’d like to go on an LGBTI night in Birmingham with him.