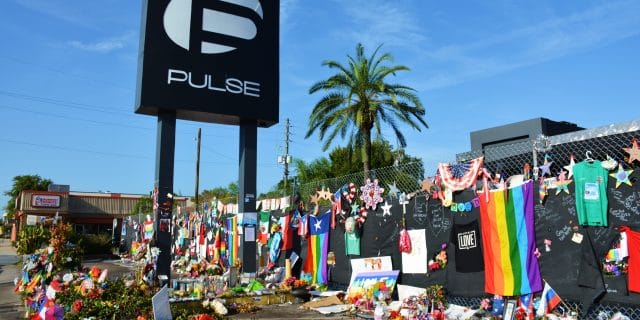 Almost three years after the Pulse nightclub shooting, we may be on the precipice of a major political nod.

Members of central Florida’s congressional delegation are working on a bill that would make the location of the Pulse nightclub shooting a national memorial.

U.S. Reps. Darren Soto and Stephanie Murphy announced their plans for the bill on Monday while speaking at a ceremony outside of the infamous location. Federal recognition of the site would mean government protection under the national park system and the ability to collect public or private grants.

Currently, the location is acting as an interim memorial backed by the OnePULSE Foundation, which was made by Pulse owner Barbara Poma. If the bill is approved, it would make the spot permanent and official.

ORLANDO – Secretary of Homeland Security Jeh Johnson visits Pulse Nightclub on the three-month anniversary of the shooting which left 49 people dead in Orlando, Sept. 12, 2016. Secretary Johnson viewed the inside of the nightclub before laying flowers at a makeshift memorial outside of the club where he spoke to a chaplain there who had assisted those impacted by the shooting. Official DHS photo by Jetta Disco.

Around $14 million has already gone into the project, but the project’s completion will take an estimated $50. Part of that number includes an international design competition that launched this March.

The competition resulted in 68 teams from 19 countries submitting designs to honor the tragic night. These contestants were asked to show their architectural experience and express how their designs could honor onePULSE’s mission, “We will not let hate win.”

So far, the competition has been dwindled down to six finalists. Three teams are from the United States, while the other three are from France, Ireland, and the Netherlands.

Once the design team is chosen, construction can continue and the National Pulse Memorial and Museum will rush to completion by 2022.