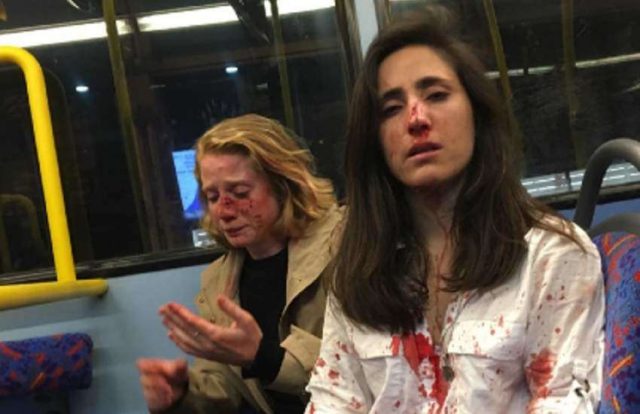 Two women have suffered a vile homophobic attack in north London on the night of 5 June.

Ryanair flight assistant Melania Geymonat was riding the bus with her girlfriend Chris when the pair were attacked by a group of men.

The men started harassing them and while describing sexual positions. The incident escalated in a fight which left the two women covered in blood.

Geymonat opened up on the horrendous attack on her Facebook page. She also shared a picture of the attack where her white shirt is soaked in blood.

‘Last Wednesday, I had a date with Chris. We got on the Night Bus, heading for her place in Camden Town, climbed upstairs and took the front seats. We must have kissed or something because these guys came after us,’ she wrote.

‘I don’t remember if they were already there or if they got on after us. There were at least four of them. They started behaving like hooligans, demanding that we kissed so they could enjoy watching, calling us “lesbians” and describing sexual positions. I don’t remember the whole episode, but the word “scissors” stuck in my mind.’

‘It was only them and us there. In an attempt to calm things down, I started making jokes. I thought this might make them go away. Chris even pretended she was sick, but they kept on harassing us, throwing us coins and becoming more enthusiastic about it,’ she continued.

‘I just hope that in June, Pride Month, stuff like this can be spoken out loudly so they STOP HAPPENING!’ she finally wrote.