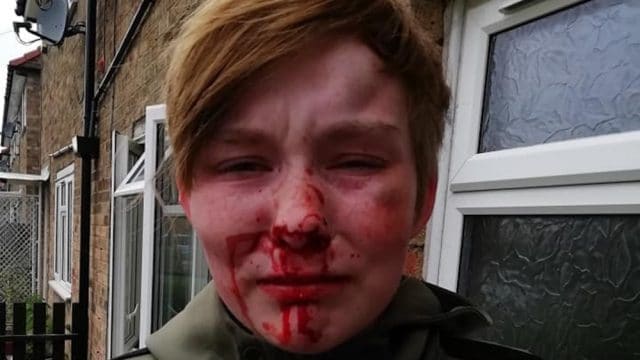 Ellie-Mae Mulholland — an 18-year-old lesbian from the Walsall Garth area of Hull, England — was reportedly beaten “black and blue” by two so-called friends because she asked for one to pay back 10 pounds ($12.47) that she loaned them.

According to Hull Live, Mulholland was attacked on the street on July 8 before 4.30 p.m.. According to her 22-year-old sister, Stevie-Leigh Ansell, “My younger sister was out and about on her way home from one of her friend’s house. She had seen a couple of her friends, who are usually her friends, and one of them owed her a tenner and Ellie asked about it.”

Mulholland was reportedly on the phone with her mother when the attack began. Her “friends” called her a “f*cking lesbian” and allegedly said, “You and your girlfriend are going to get it ten times worse next time.”

Over twelve dollars and forty-seven cents.

Ansell also said that Mulholland’s friends sometimes refuse to take cigarettes from her because they’re afraid they’ll catch “lesbian germs.” “As soon as they have an argument it is straight to her being a lesbian,” Ansell said. Mullholland’s pals sound like real treasures.

Mulholland ended up going to to the Hull Royal Infirmary to receive treatment for her injuries. She sustained a broken nose, “two black-eyes and two big lumps on her head,” according to Hull Live.

In response to the attack, Ansell posted images of her sister’s bloody, tear-stained face on Facebook along with the message, “Think you can do this to my sister daft c*nts! YOU WAIT!!!!!!!!!!! Happened on Boothferry, anyone see this happen as police are involved!! Please share!!”

Police have started investigating the bashing. Detective Chief Inspector Ali Sweeting says that police are investigating the degree to which Mulholland’s sexual orientation played a role. They’ll interview Mullholland and her “friends” and might pursue hate crime charges to discourage similar homophobic attacks in the region.