Home Gay Life Lesbian Twitter on London bus attack: ‘This has been happening for years’ 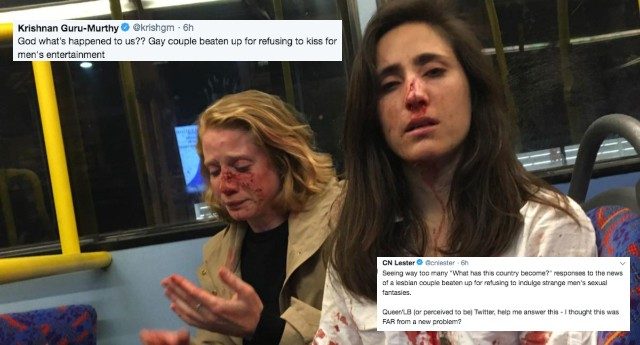 The news that a lesbian couple were left bloodied after a homophobic attack on a London night bus has provoked outrage, with politicians including Labour leader Jeremy Corbyn calling the attack “absolutely shocking.”

Corbyn also said, “We must not, and will not, accept this homophobic and misogynist violence in our society. Solidarity to Melania and Chris, and to all in the LGBT+ community for everything they endure for simply being who they are.”

Penny Mordaunt, women and equalities minister, said, “[I’m] appalled to see this kind of homophobic violence in the UK.”

But queer people on Twitter have been pointing out that this kind of violence against lesbian women has been happening for years.

“Seeing way too many ‘What has this country become?’ responses to the news of a lesbian couple beaten up for refusing to indulge strange men’s sexual fantasies,” said CN Lester, a trans author. “I thought this was FAR from a new problem?”

“NAIVE to think NEW. Ask LGBTQIA+ colleagues, friends, family. This has been happening to us for years, all over UK / globally,” said Dolly Dagger, in response to a tweet from Channel 4 journalist Krishnan Guru-Murthy.

Guru-Murthy had said, “God what’s happened to us?? Gay couple beaten up for refusing to kiss for men’s entertainment.”

<p dir=«ltr» lang=«en» xml:lang=«en»>For straight men, it was the most significant bit of misogyny they’d ever seen.

For queer women it was Tuesday. https://t.co/hBl9YxgRYe

“When I was 18 I got a taxi home with a girl to my flat, we were kissing in the back of the taxi. The male taxi driver pulled over and said he would give us the ride for free if he could watch. The doors were locked when he made this offer,” said Sally-Anne Beverley.

<p lang=«en» xml:lang=«en»>In response to Lester’s tweet, Twitter user Nash said, “Not new at all. Last year I was walking with my gf (I’m AFAB and hadn’t come out yet), holding her hand, and we were surrounded by a group of young men who yelled at us and tried to stop us from getting away from them. We managed to get to safety but it was a scary moment.”

Also replying to Lester, Dr J Harrison said, “Not new at all – my darling and I were once propositioned with “How much for both of you?” in the red-light district of Paris.”

Ely Percy, a queer Scottish author, said, “It was always ‘which ones the man?’ And ‘who wears the strap on’ and ‘you’ve just not met the right man’. Only once can I remember someone threatening to beat me up but that’s because he came onto me (he knew I was not into men) an I said ‘I know your wife’.”

They added, “Yeah when I was seen as one half of a lesbian couple … got it all the time. Men asking us to kiss or asking which one was the man. Honestly you’d think they’d come up with new material.”

<p dir=«ltr» lang=«en» xml:lang=«en»>Not a new problem. Have been cheered for kissing a woman in public and it is a hop and skip from that to this. I feel less safe being affectionate in public with women than with men. As I am bi I can palpably tell the difference.

Melania Geymonat shared a photograph of herself and her date Chris covered in blood after they were set upon by a group of four men in the early hours of May 30.

The couple were on night bus in north London heading home from a date when the incident took place. Geymonat has been unable to return to work since the incident, which has left her with a suspected broken nose.