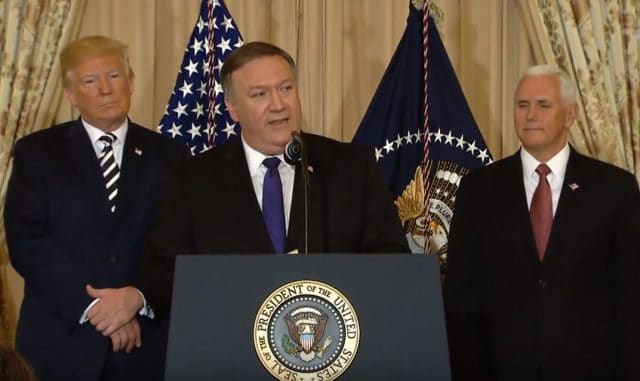 LGBT rights activists are sounding the alarm after reports surfaced last week that Secretary of State Mike Pompeo is setting up a commission at the State Department to redefine human rights as based on what the department is describing as “natural law and natural rights,” reports ABC News.

The activists fear it will mean an end to promoting protections for both groups around the world.

“It’s an important review of how we think about human rights inside of our efforts in diplomacy,” Pompeo told reporters Thursday, adding the effort is focused on “how do we make sure that we have a solid definition of human rights upon which to tell all our diplomats around the world how to engage on those important issues.”

The State Department issued a public notice in the Federal Register on Thursday that says the Commission on Unalienable Rights will provide Pompeo “advice and recommendations concerning international human rights matters” and meet about once a month.

“The Commission will provide fresh thinking about human rights discourse where such discourse has departed from our nation’s founding principles of natural law and natural rights,” according to the notice.

Some human rights activists “privately said they worry that talk of the ‘nation’s founding principles’ and ‘natural law’ are coded signals of plans to focus less on protecting women and LGBT people,” Politico reports.

Use of the term “natural law” has concerned some advocacy groups and department staff, as it is interpreted in this case as “God-given” or religiously-based rights that affect issues like sexuality, abortion rights, and more. In particular, the phrase has been prominent in the work of Princeton professor Robert George.

George has played a prominent role in the creation of the commission, according to a source familiar with the plans for the commission. George, co-founder of the National Organization for Marriage, a nonprofit that advocates against same-sex marriage, is among the 15 academics recommended to make up the panel, according to the source.

Author of the 1999 book “In Defense of Natural Law,” where he argued against homosexuality and abortion rights and in favor of religious liberty, George also wrote the original concept note that outlined a vision for the commission, the source said.

The commission “is absolutely about those issues, but it’s not explicit in the paper,” the source said. “It questions whether and which human rights are universal.”

Skinner recently raised eyebrows by describing the U.S. rivalry with China as a clash of civilizations and “the first time that we will have a great power competitor that is not Caucasian,” reports the news outlet.

Activists were further alarmed by reports that the department’s Bureau of Democracy, Human Rights, and Labor was not consulted in the process.

“The wording of the Commission’s mandate raised eyebrows with human rights advocates and congressional staff. The fact that it was announced with no prior outreach to or input from the human rights community immediately raised concerns over its motives… [and] the State Department already has a well-defined understanding of how to advance human rights and maintains several offices dedicated to various human rights issues,” said Rob Berschinski, who served as deputy assistant secretary of State for Democracy, Human Rights, and Labor, or DRL, in the Obama administration.

Pompeo said Thursday the project is “separate” from DRL, but “deeply connected to the work that not only DRL does, but that the entire State Department does around the world.”

“If the administration truly wants to engage in a meaningful dialogue about respecting human rights, then we are happy to have that discussion. But the fact that this panel was announced without details or consultation with human rights experts suggests that this may be just another instrument to negate rights, rather than protect them,” said Tarah Demant, director of Amnesty International’s Gender, Sexuality, and Identity program.