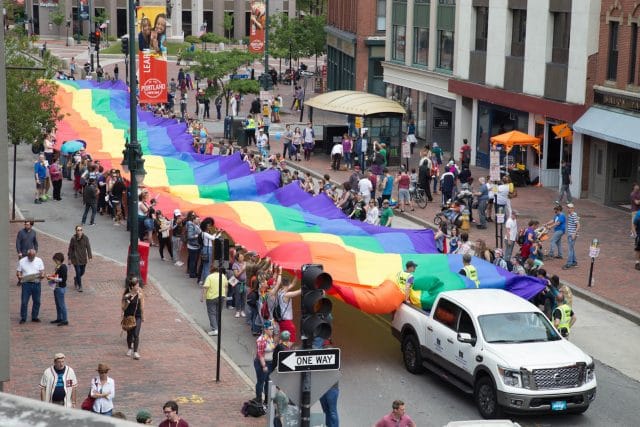 The Portland chapter of the largest socialist organisation in America has asked uniformed police not to attend the city’s Pride parade.

The Democratic Socialists of America (DSA) in Portland, Oregon called for parade organisers to ban uniformed officers who they say have “ignored our community and blamed the victims.”

“The first Pride was a protest led by trans women of colour against the police,” the letter went on. “We are concerned about the presence of police in our community who are not held accountable.”

However a volunteer reserve officer for the Portland Police Department said that the request for officers not to march was “essentially trying to put them back into the closet,” according to Portland newspaper Willamette Week.

Robert Ball, who has marched in the Portland Pride parade for 23 years, told the newspaper in an interview: “Banning police officers from a Pride parade—I think makes it go back in the other direction and actually hurts trust.”

He continued: “I understand the history of it. It’s horrible to even think about it. But it happened. It’s a real history. But that history is not the world we live in now. I can’t put myself in the place of an African American LGBTQ person who is afraid of the police.

The Portland chapter of the Democratic Socialists of America are asking police officers not to attend the Pride parade. (Portland DSA/ Facebook)

“[But] I can put myself in the place of being fearful because I’ve been through that. I grew up in rural Oregon as a gay kid who heard slurs and was afraid to come out. I went into the Police Bureau, and I felt afraid. [But] sometimes you have to feel discomfort to have progress.”

The Portland DSA also wants pride organisers to stop working with corporate sponsors because it is concerned about “the exploitation by major corporations who wish to profit off of our identities.”

The local DSA branch ended their letter saying: “We hope you will consider our critiques. But even if you don’t, we’re still here, we’re still proud, and we’re not going away.”

Portland Pride is expecting 60,000 people to attend the parade, according to Oregon Live.