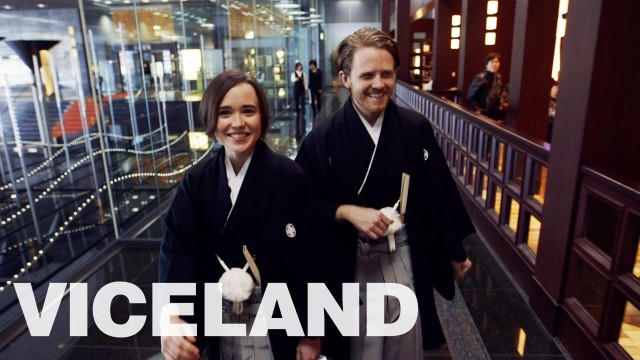 What doesn’t kill you just makes you gayer!

Famous actress Elen Page, who came out in 2014, decided to take part in a new project – documentary TV series “Gaycation”. Each series of this film will tell us about the situation of LGBT people all over the world and about the problems that they keep facing on a daily basis.

Ellen Page, being lesbian and an active supporter of the LGBT movement, understands these people like no one else can. She is ready to fight for freedom and equality.

American Chanel “Viceland” presented the trailer of the documentary TV series “Gaycation”, where Ellen Page took the role of presenter.

Together with her best friend Ian Daniel, she traveled to the United States and other countries (Japan, Jamaica, and Brazil), to explore all the troubles the representatives of the LGBT community in different countries and cultures face from day to day. Ellen Page presented some shorts of their trip in her account on Instagram.

The trailer shows us how Ellen and Daniel visited the first gay parade in Jamaica and go through a gay district of Tokyo.

Now you can join us and watch the trailer of this film:

We assume it will be a great project. It is coming so soon. Don’t miss! The first series of “GAYCATION” stars on 29th of February.

Keep in mind! You are not alone. There are millions of people around the Globe who suffer now and have to hide in their closets. But they want to open the door and tell the world who they really are. Now they have a chance to do it.