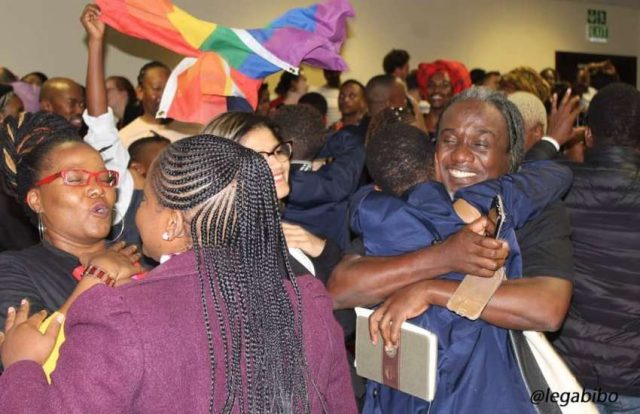 Hundreds of LGBTI campaigners, celebrities, and locals on the ground in Botswana celebrated the news that the High Court had decriminalized homosexuality.

With joy, with tears, and others with reverence of how one court ruling will pave the way for insurmountable progress in the country.

With the colonial-era laws overturned, activists hailed the decision as a crucial step for LGBTI rights in the African continent.

Anna Mmolai-Chalmers, CEO of Lesbians, Gays and Bisexuals of Botswana (LEGABIBO) : ‘It has taken a long time for our community to be where it is.

‘This incredibly life-changing decision, although it does not right all the wrongs done to individual members of the LGBT community, is a step towards restoring our dignity as human beings.’

‘The decision has several implications for the LGBTIQ community.

‘Not only does it provide legal affirmation and recognition of the rights of LGBTIQ persons, but it allows an important space for addressing public health issues more efficiently and effectively.

LGBTI and Human Rights Campaigner, Peter Tatchell said: ‘This is a historic decision that will embolden LGBT+ campaigners across Africa.

‘It is another blow to the homophobic laws that were imposed on many African countries by Britain during the colonial era. Yet again it is the courts, rather than governments, that are often leading the way in ending anti-LGBT+ persecution.’

‘We heartily congratulate the Botswanan and southern African LGBT human rights defenders and lawyers who have worked tirelessly on this pivotal case,’ said Téa Braun, director of Human Dignity Trust.

They added: ‘LGBT people in Botswana have had their constitutional rights confirmed today and can now be more hopeful of a future free from discrimination, harassment and violence.’

Other groups praised the work of campaigners on the ground in the country. Mainly leading LGBTI group, LEGABIBO.

‘The High Court recognized that Botswana’s law and policies need to protect the rights of all, regardless of sexual orientation,’ said Neela Ghoshal, senior LGBT rights researcher at Human Rights Watch.

By 9am sharp, the court was already crammed. LGBTI and human rights advocates, some holding Pride flags up high, packed the courtroom in Gabourne.

Yet all waited in anticipation to hear the judgement handed down by the Honourable Judges Tafa, Leburu and Dube.

That day, they were all there for one reason. The High Court was hearing the case after a gay man known only as LM, who filed a petition to repeal Section 164.

Furthermore, the whole bench agreed that a person’s right to privacy included the right to choose a life partner.

‘Sexual orientation is not a fashion statement. It’s an important attribute of one’s personality. All people are entitled to autonomy over their sexual expression,’ said Leburu in the ruling.

Nevertheless, the call came after an earlier bid to strike down Botswana’s anti-sodomy laws failed in 2003. After a case reached the national appeals court.

That decision ‘left open a window’ to another challenge, Leburu said.

Botswana’s penal code outlawed homosexuality since the late 1800s – an artefact of British rule when the country was known as Bechuananaland.

But with homosexuality still outlawed in over 30 countries across Africa as well as shifting cultural norms, the fight goes on.

However, in several northern African nations  – including Somalia and Sudan – homosexuality is punishable by death. Meanwhile, offenders in Sierra Leone, Tanzania and Uganda face life in prison.