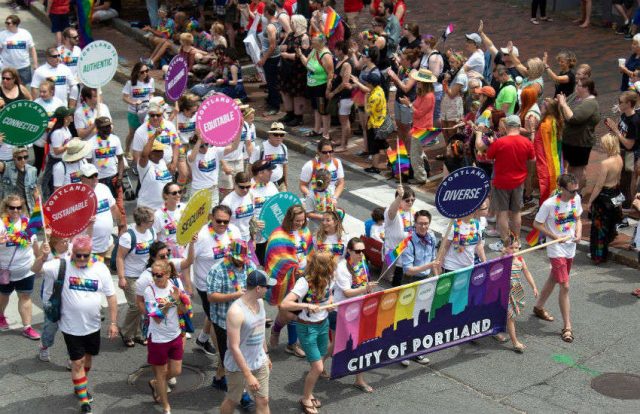 Organisers of Portland Pride have been asked to ban LGBTI police officers from attending this year’s gay Pride march.

The Democratic Socialists of America (DSA) in Portland, Oregon called for parade organisers to ban uniformed officers. The reason, they say, is because they have ‘ignored our community and blamed the victims.’

In an open letter to parade organisers, Pride Northwest, the DSA said the policing system was prejudiced against ‘anyone non-normative.

‘Queer people are under attack in this country’, the DSA wrote in the letter.

‘This has been true for decades in the United States, and today the hatred spurred on by Trump’s bigoted presidency has bled into our community: two months ago, the Portland DSA Queer Caucus was targeted by Patriot Prayer, while Trans and non-binary people in Portland have been harassed and attacked on the streets.

‘All the while, Portland police ignored our community and blamed the victims.

‘However, as Queer people we know that it is not just proto-fascists and the police we need to worry about, but also the exploitation by major corporations who wish to profit off of our identities.

The DSA also called on the LGBTI community to write letters to Pride Northwest to demand an end to ‘their collaborations with major corporations and the Portland Police, and instead focus on empowering the Queer community.’

Local online newspaper the Willamette Week said some officers felt strong ties with the parade and marching in their uniforms.

Police officer, Robert Ball, who has marched in the Portland Pride parade for 23 years, told the newspaper in an interview: ‘Banning police officers from a Pride parade—I think makes it go back in the other direction and actually hurts trust.’

‘I understand the history of it”, he said. ‘It’s horrible to even think about it. But it happened. It’s a real history. But that history is not the world we live in now.

‘I can’t put myself in the place of an African American LGBTI person who is afraid of the police.’