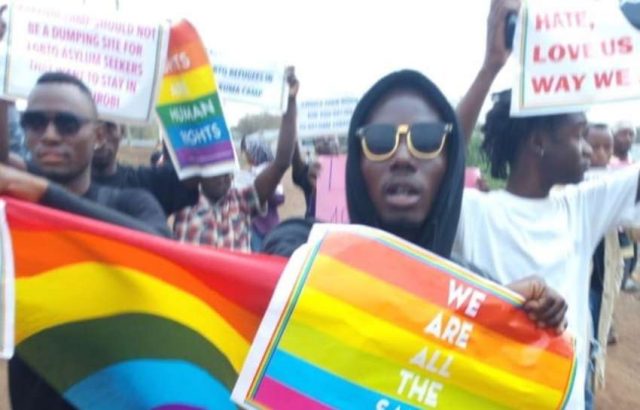 A landlord evicted a group of 76 LGBTI refugees in Kenya with no notice. Locals beat and stoned one man who tried to leave.

The refugees known collectively as Great Lakes were living in the Kangemi area informal settlement in the west of Nairobi. But Great Lakes leadership claimed on Monday (10 June) that their landlord wanted them out of the properties ‘immediately.

A local Kangemi chief even joined in on the eviction calling the group cursed and said ‘LGBT are not wanted here’. The chief accused them of spreading disease and called the police on them.

One refugee who wanted to remain anonymous said the landlord gave them three hours notice to leave. But as they tried to leave, locals had gathered around outside threatening to beat and kill them.

‘The incident yesterday was worse than it’s ever been,’ one refugee who asked not to be named told Gay Star News.

‘We paid our rent on time but were surprised when the owners of the house came in to tell all LGBTI refugees to get out with all our properties and without any notice.

‘All children with their mothers went outside, men started to taking properties out, but then locals who were with the homophobic community were there, ready to beat or kill us, saying to us [we should go] back to our homelands.

‘Five people from the local community beat one of our members before we rushed to intervene and help.’

They called the who gave them money for food. RefCEA managed to negotiate a two-day extension to the eviction.

RefCEA argued the eviction was ‘a clear violation of the Tenancy Agreement from PATAYA PROPERTIES Item 11. According to that agreement, tenants should receive one month’s notice of an eviction.

The Great Lakes group are predominantly from the Democratic Republic of Congo, with some from Burundi, Rwanda, South Sudan, Uganda, Tanzania, Somalia and Ethiopia. Among the group are roughly 14 lesbians, 10 children, 20 trans women, one intersex and the remaining are gay and bisexual men.

They had escaped to Kangemi after facing

The refugee who spoke to GSN said the situation remained tense.

‘The situation now is very difficult as during the night we were in two rooms with 76 LGBTI from the Great Lakes group. We distributed a meal equitably but we have no security and we can not even walk outside’ he said.

‘Our lives are in danger and we are in an extremely precarious position.’

The 76 refugees lived in six rooms measuring 2×2 meters and sharing three or four to a single bed. But now they are only living in two rooms.

RefCEA said this showed a ‘greater failure by the Kenyan government and UNHCR services to adequately provide for LGBTQI refugees’.

Not many are receiving . Trans refugees have not left their rooms in months, according to RefCEA.

‘All LGBTQI refugees in Kenya are living in less than optimal conditions,’ said Michael B. Clark, RefCEA Advisory Board.

‘However, the conditions for this group are among the worst I have seen, ever. The situation is dire.

‘The Refugee Coalition will work with local and international partners over the next two days to secure funding for safe housing, transportation, security, and food.