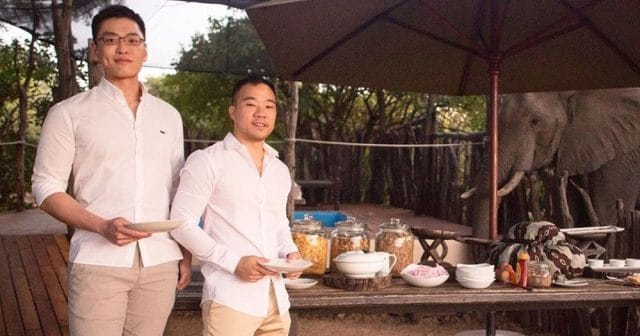 Huanwu, who is also the grandson of Singapore’s first Prime Minister Lee Kuan Yew, and his partner Heng Yirui shared the news of their marriage earlier today (May 24).

Posting on Instagram, Dr. Yirui, who works as a veterinarian, wrote: “Today I marry my soul mate. Looking forward to a lifetime of moments like this with @hero.unit.”

The pair were photographed alongside a lavish display in Cape Town, with an elephant in the background.

Today I marry my soul mate. Looking forward to a lifetime of moments like this with @hero.unit

Huanwu also took to social media to share news of the ceremony, alongside snaps of the pair enjoying their time in Cape Town.

The photos, which featured the couple with their arms around each other and another of a dog balancing two wedding rings on its nose, were posted on Facebook with the caption: “Safari before our big day. #lovewins”

Yirui also posted on Facebook to say: “Today I marry my soul mate. The journey has been a great one with the love and support of friends and family.

“Here’s to a lifetime of loving companionship and good cheer!”

Huanwu came out in July last year, during an LGBT exhibition which coincided with Singapore’s Pink Dot Pride event.

“For the LGBT community, it is but a dream to share in the same human dignities as you, to live full and proper lives,” he posted on Facebook after the event.

“If you’re a closeted member of the LGBT community, I also urge you to come. I hope that you will look past the security barricades and ID checks and see – if only for an afternoon – that there is more to life than the darkness of the closet, that there are people out there who care.

“Finally, if you’re an out member of the LGBT community, you have a moral responsibility to come. If you do not stand up yourself, you cannot expect others to fight for you. This is your moral duty.”

Gay sex is still illegal in Singapore, under its Penal Code Section 377A.

Singapore-based LGBT+ activist Rachel Yeo previously told PinkNews that “it definitely takes a thick skin” to be LGBT+ in the country.

Activists hope that the recent decriminalisation of a similar Penal Code in India will spur Singapore on to follow suit.