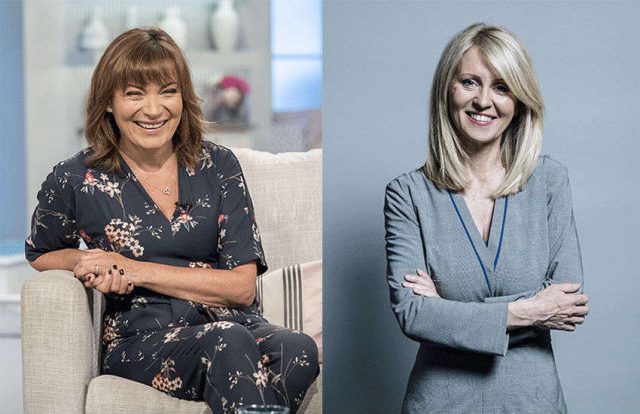 Lorraine Kelly has spoken out about her history with UK Conservative Prime Minister hopeful Esther McVey.

The TV presenter used to work with McVey on ITV morning show GMTV in the 90s.

Lorraine said today: ‘I strongly disagree with her on LGBT rights’.

McVey has consistently voted . In 2013, for instance, she twice voted against same sex couples being allowed to marry.

Talk of a feud began swirling yesterday when Lorraine avoided discussing Esther on Good Morning Britain, despite a prompt by host Susanna Reid.

‘Do you remember Esther McVey from her GMTV days?’ Reid asked her.

Kelly evasively replied: ‘Yep. Yes I do. Right, coming up after half past eight…’

She furthermore added: ‘But she’s great and it was a great show, and I can’t believe it was 20 years ago, but never mind, it was really good at the time, really good fun.’

Speaking on Good Morning Britain today, Lorraine replied: ‘There is no battle. I’m baffled by that, because I had my own show since 1992, and I don’t think she joined until five years later… I’ll be genuinely honest, I don’t remember her being… it was such a long time ago.’

She furthermore said: ‘My show was totally separate from that show, so there was no kind of interaction with her to be honest.’

Lorraine also added: ‘Yesterday I just got sick to the back teeth of the whole toxic political atmosphere.

‘I strongly disagree with her on LGBT rights and I just thought to myself, “I’ve had enough of this. We’ve had two and a half years of going round in circles and not sorting Brexit out and now we have got a state in Britain where people are at each other’s throats and it has to stop”.’

Lorraine won the Celebrity Ally award at the 2015 LGBT Awards.