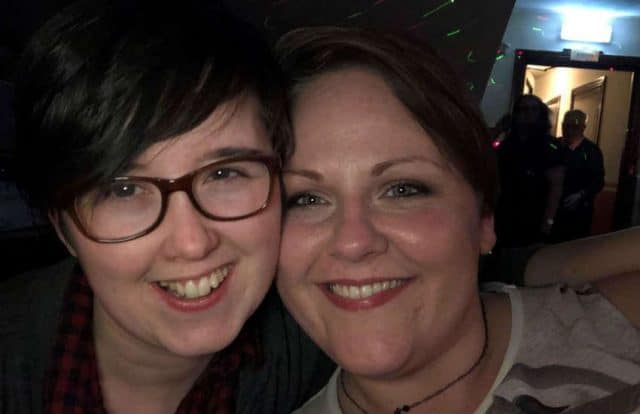 The partner of Lyra McKee is urging the UK government to extend marriage equality to Northern Ireland.

Sara Canning will lead a rally in Belfast on 18 May calling for formal recognition for same-sex couples.

LGBTI campaigners in Northern Ireland have organized a major demo in Belfast to call for LGBTI equality.

Northern Ireland lags behind England, Scotland and Wales and the Republic of Ireland in terms of LGBTI and reproductive rights.

Canning was the partner of lesbian journalist McKee, killed in Derry last month. She has called for the UK Government to extend same-sex marriage legislation to Northern Ireland.

‘Lyra and I wanted to get married, surrounded by our families and friends, because we shared a love which meant we wanted to spend the rest of our lives together,’ she said ahead of the march.

‘But, as things stand, the law in Northern Ireland says that the love that Lyra and I shared isn’t equal.’

She furthermore added: ‘It is unbelievable, and simply unacceptable, that in 2019, this discrimination is allowed to continue in any part of the UK or Ireland.’

‘With Stormont out of action for almost the last two and a half years, we need the UK Government to step in.’

‘That’s what I told Theresa May at Lyra’s funeral and that’s what I will be saying at the march for marriage equality in Belfast. I hope the Prime Minister is listening. Couples like Lyra and I should not have to wait a day longer for the law to recognize us as equals.’

Organizers of the rally say they expect thousands to join the march for marriage equality on 18 May. The demo will begin in the Belfast’s Writers’ Square at 1pm. It will then go move to Belfast City Hall at 2.15pm.

‘Stormont has proved incapable of delivering marriage equality for the LGBTI community, despite massive support among the Northern Ireland public for a law change,’ Patrick Corrigan said. Corrigan is Amnesty International’s Northern Ireland Director and a member of the Love Equality campaign which is organizing the march.

They are demanding that any re-established Stormont government must deliver marriage equality legislation. This will finally bring the region into line with the rest of the UK and Ireland.

In the continued absence of devolved government, they want the UK Government to step in by passing legislation at Westminster.

‘The UK Government likes to champion its record on LGBTI rights, but has shamefully ignored cross-party calls for progress on same-sex marriage in Northern Ireland.

‘We are calling on people, who want a different and fairer Northern Ireland than politicians have so far allowed, to join us on the streets of Belfast this Saturday.

‘We are making a demand for equal rights for all, a demand which must be heard in the corridors of Stormont and Westminster.’

A member of the New IRA shot McKee dead in Londonderry on 18 April. The lesbian journalist was wounded on Good Friday Eve during a riot where New IRA had targeted police and also thrown petrol bombs at them.

Police arrested a 57-year-old woman under the terrorism act over the murder.

Foster said she sympathized with Canning and McKee’s family over the tragedy. But she clarified: ‘You shouldn’t conflate sympathy and empathy with the political issue… of marriage’.