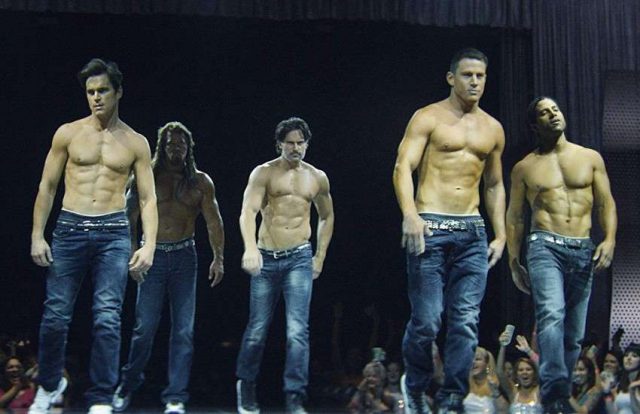 The Magic Mike stage musical has canceled its run at a Boston theater. These performances were meant to be a trial run before making its way to Broadway.

Based on the 2012 film of the same name, Magic Mike tells the story of Mike Lane, a male entertainer.

Channing Tatum stars in the films loosely based on his own life and career.

When the stage musical was first announced, it was described as a prequel, set both before the original film and its 2015 sequel Magic Mike XXL, and centered on Mike as a college student.

The synopsis for the musical read: ‘Struggling to make ends meet, Mike takes a job dancing at an exclusive night club… and winds up loving every minute of it. But as he scrambles to hide his alter ego from his dad and girlfriend, he finds himself needing to make some difficult choices. Can Mike follow his dreams without losing more than his clothes?

Now, however, it’s been indefinitely postponed.

The Emerson Colonial Theatre released a statement on Friday (24 May).

‘The producers of Magic Mike The Musical have cancelled a Boston engagement, saying that they don’t feel the musical is ready for production,’ it read.

Trip Cullman was set to direct the production, running from 30 November 2019 through 5 January 2020. The statement said nothing about the musical’s future, on Broadway or otherwise.

In 2012, the original Magic Mike movie proved to be both a critical and financial success. Made for a mere $7 million, the movie ended up grossing $167 million worldwide.

It also earned praise for its focus on female sexuality and desire, as well as flipping the table on objectification and make men the barely-clothed subjects.

While the sequel earned less at the box office ($122 million worldwide) and more middling reviews, it still made an impression.

The films did so well that Magic Mike Live, a live male entertainment show, opened in Las Vegas.