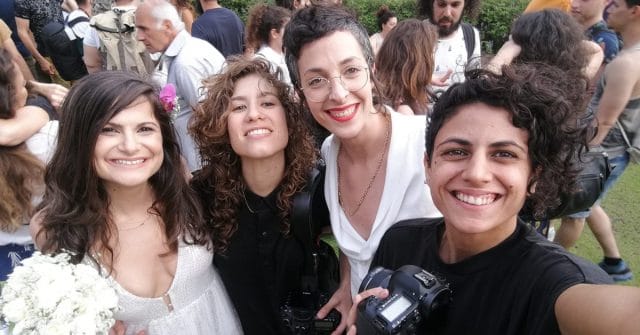 23 same-sex couples took part in a mass wedding in Tel Aviv on Tuesday (June 4) to campaign for the right to marry in Israel.

The couples walked down the aisle at the Tel Aviv LGBTQ Centre in unison, exchanged vows and were joined by hundreds of family and friends at the unofficial marriage ceremony.

Adiya Imra Orr, one half of a couple taking part, wrote in a post on Facebook before the event that she wanted “the state to get out of our underwear and hearts.”

“In Israel 2019, the love of women, men or just non-Jews is still not a love that is worthy of the state’s stamp and therefore illegal,” she wrote.

“Quite a few heterosexual friends ask me, ‘Why you should marry? It’s an old-fashioned institution anyway.’ I would tell them the same about the right to a passport.”

Orr said she was not “super-private,” but would not have taken part in the mass wedding if it were not in protest of Israel’s attitude towards the LGBT+ community.

Orr’s partner Danielle Aisenman also wrote on Facebook before the wedding: “Adiya (my future wife) and I decided to take part in a stunning project next week, which is a huge wedding whose sole purpose is to show that it is possible to fight less and love more. And to show that we will never give up on equal rights!”

Israel is often perceived as a gay-friendly tourist destination, with its Pride parades and gay beach, but LGBT+ rights in the country lag behind increasing social acceptance.

Jewish ultra-Orthodox parties, powerful in the Israeli parliament, have rejected legislation that affords rights like same-sex marriage and the inclusion of gay men in surrogacy laws, according to The Guardian.

Jerusalem Chief Rabbi Aryeh Stern called last for rainbow flags not to be waved at the Jerusalem Pride march this year because they were “ugly.”