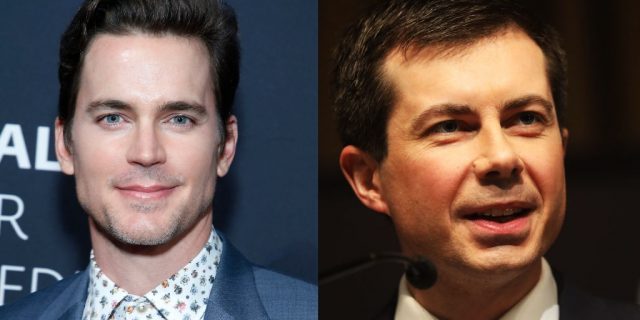 Bomer made the revelation while speaking on Variety and iHeart’s movie podcast The Big Ticket.

He revealed that he and his publicist husband Simon Halls will host the fundraiser, but that they are not officially endorsing him just yet.

“I’m so thoroughly impressed with him on every level and he is obviously so much more than capable of the mantle of the office of President,” Bomer said.

“It is kind of a getting-to-know-you and throwing in our hat to support him as best we can. I think it’s amazing that we have him as a candidate and it is legendary and historic and it’s just kind of the icing on the cake that he is also I think at this point the most qualified candidate to lead us.”

Bomer was on the podcast speaking about his new film Papi Chulo, which follows the story of an unlikely friendship between a gay weatherman and his Mexican handyman.

He also said that there are now more gay characters than ever before on screen, and said they are becoming more complex.

“They’re not just the sassy stylist or the friend with a lot of attitude or the guys who’s going to help the straight guy pull it together,” Bomer said.

“There’s really nothing wrong with those things but they did become tropes over the years and often times were the only dimension that the character had to bring to the table so I did always pass on those opportunities.”

Other high-profile donors to Buttigieg’s campaign include Deadpool actor Ryan Reynolds, Glee star Jane Lynch, West Wing’s Bradley Whitford and Mandy Moore of This Is Us.

Buttigieg has been making waves on the political scene in the United States since he announced his candidacy earlier this year. The gay presidential hopeful is seeking the Democratic nomination for the presidency.

The Mayor of South Bend, Indiana, officially announced his campaign in April.

In his speech to the Pete for America rally, Buttigieg said: “My name is Pete Buttigieg. They call me Mayor Pete. I am a proud son of South Bend, Indiana, and I am running for President of the United States.”

He added: “We live in a moment that compels us each to act. The forces changing our country today are tectonic.