Home Gay Life Most delicious Pride events around the globe 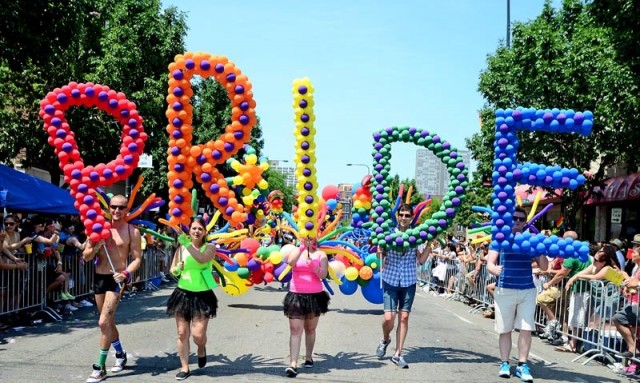 We’re taking a whistle-stop tour around the globe as we explore what’s happening at Pride events as 2015 closes and going into 2016. Let’s start as we mean to go on, with Amsterdam’s incredible Leather Pride. Taking place this week, we’ve already missed the launch night and the naked bar night (damn!), there’s still plenty to, ahem, get up to before the events end on Monday the 26th. It has been going strong since 2004, and has fought many battles against discrimination and intolerance during that time. Staying true to its roots, it remains a fiercely political Pride event, and emphatically encourages “diverse gender and sexual minorities” to attend the parade.

Strong themes make this a Pride to remember – “Yell Out For Equality”, the visual motif of the giraffe and the colour ‘yellow’ all combine to make this a visually spectacular Pride event.

While still a fairly small event in comparison with some of the others on this list, its participants are not shy about making their voices heard, so get along and join them!

It seems fitting that the first and largest Black Pride in the States is held in the nation’s capital of Washington, D.C. The state was among the first to allow same-sex marriages and bring in laws to protect LGBT people, and also has a large population of black LGBT residents.

DC Black Pride attracts more than 50,000 men and women who gather together to celebrate the rich and diverse culture of black LGBT people, and began when the community felt marginalised from the rest of the larger LGBT community.

It has since became an incredible event that honours black LGBT trailblazers, and mixes a political message with a vast array of exciting and fun events, as well as workshops, Poetry Slams, a Film Festival and a writer’s forum. One of the biggest, brashest and most extravagant Pride events on the planet, it attracts a huge mixed audience, with mainstream participants happily mingling with their LGBT brothers and sisters.

The Aussies don’t do things by halves, and this massive event attracts up to 200,000 revellers. It’s been named the “best gay event in the world” by Planetout, and Conde Nast called it one of the world’s top ten costume parades.

The finishing touches are being made to the 2016 programme, but top and tails remain the same – a 10,000 strong parade to start the day, with an unforgettable party at the end – and there are always a huge amount of exciting events during the festival period. We close this run-down with another Pride that happens soon – New Orleans Halloween Pride! This spooktacular event is one for all you dark-sided boys and girls out there.

In it’s incredible 31st year, the Hosts of Halloween raise money for Project Lazarus, a fantastic organisation that provides direct AIDS services, and is one of the only 100% donation/volunteer weekends left in the US calendar.

So it’s a cause worthy of your support – but it’s also one of the biggest, maddest Halloween events you’ll see. This year has an Ancient Egyptian theme, so expect Pharaohs, mummies and even a few gods and goddesses taking part in what they call a “story of lust, betrayal and revenge”.

Now, can I get a last minute flight…?