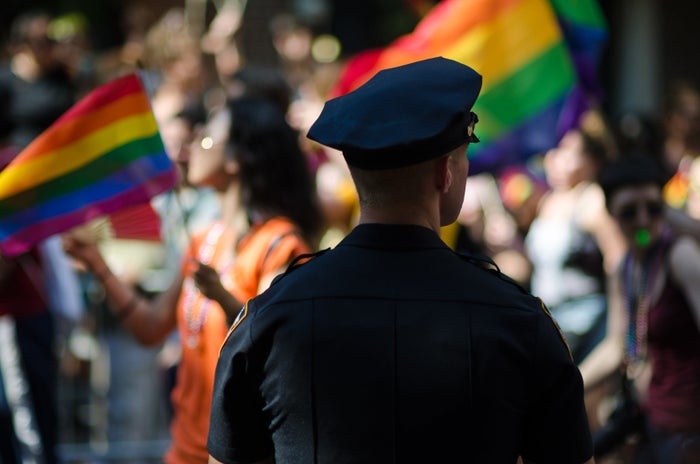 LGBTQ Americans want cops and corporations to participate in pride parades by an 8-to-1 margin, a landslide of support that breaks from a vocal faction of protesters, according to a new survey conducted by Whitman Insight Strategies and BuzzFeed News.

The nationwide poll also found most LGBTQ people mistakenly think they occupy much more of the population than they actually do (y’all, it’s nowhere near half the country).

They overwhelmingly believe kink and families should be on display at pride events, think social media platforms like Instagram are hurting their body image, and say Taylor Swift isn’t a gay icon.

The poll, taken by 801 LGBTQ people this month in the United States, is among the most comprehensive of its type, asking more than 100 questions about gender, sex, politics, family, and discrimination.

This year’s LGBTQ survey focuses on Pride Month, which commemorates the backlash to a police raid on the Stonewall Inn in New York City. But that historic clash with cops 50 years ago doesn’t translate to banning queer officers marching in parades today — 79% of LGBTQ adults say police should be welcome to join pride events, while just 8% disagree.

Support for welcoming cops at pride was about three-quarters across a wide range of demographics — male, female, gay, lesbian, transgender, bisexual, white, and nonwhite. People of color, who made up 21% of all survey respondents, support cops in pride events by 77% to 8% (15% say it makes no difference either way). Support was slightly lower among LGBTQ people who have not come out (56%), queer/nonbinary people (57%), and those under 30 years old (70%).

As for corporate floats at pride, 76% welcome them in the festivities, while just 9% oppose.

That’s the opposite of the message planned for Sunday morning, when LGBTQ marchers in Manhattan will deliver a counterpoint to the mainstream parade happening that same day. “We stand against cops at pride,” tweeted organizers for the Reclaim Pride Coalition, which says that LGBTQ people, particularly transgender women and people of color, continue to face profiling and discrimination by police. Protesters likewise blocked the Washington, DC, Pride Parade in 2017 to denounce rainbow-festooned corporate floats commodifying a political movement and cops co-opting the procession.

Anger at cops is understandable, even these days — 7 in 10 believe cops often or sometimes discriminate against LGBTQ people, the survey found. And several corporations that display rainbow logos for pride also give heartily to Republican candidates who have advanced a national agenda to block and repeal LGBT nondiscrimination policies.

Displays of Kink at Pride

LGBTQ Americans are also into leather daddies gyrating in assless chaps, despite screeches this month from conservative pundits and LGBTQ critics who say pride is too raunchy.

Seventy-two percent say displays of kink — like bondage and leather — should be welcomed at pride. Ten percent disagreed. The minority of naysayers stirred fury on Twitter, arguing that kink at pride scars children. But polling found that opposition to kids at pride — where young eyes will almost surely witness topless dykes and dudes in thongs — is uncommon. Eighty-seven percent said families with children should be welcomed, while a mere 3% said they shouldn’t be.

The survey demographics largely match findings in a 2018 poll, also by Whitman Insight Strategies and BuzzFeed News. LGBTQ people skew more female than Americans at large — 55% — while 46% of all LGBTQ people identify as bisexual, a group that is also three-quarters female. Overall, LGBTQ people are younger than the general adult population (69% are between 18 and 39 years old), and nearly three-quarters live in cities or suburbs.

Virtually all LGBTQ Americans know about Pride Month each June, and 80% believe it’s for people like them. Forty-five percent will definitely or probably attend some sort of pride event — although those least likely to participate are gay men and LGBTQ people in rural areas, of whom 38% in both categories say they’ll probably not or definitely won’t attend.

Even so, across the board, LGBTQ people overwhelmingly (90%) believe Pride Month helps advance equal rights for LGBTQ people. There is moderate awareness of the Stonewall riots (54%). Even more, 89%, said LGBTQ history should be taught in schools.

Less popular is the idea of modifying the rainbow pride flag to include brown and black stripes to represent people of color — an idea opposed 56% to 44%. The strongest opposition is among gay men, who dislike it by a 2-to-1 margin, while transgender people, queer people, and millennials support the change with 64%, 60%, and 55% support, respectively. People of color narrowly oppose the change by just two points.

Three out of five surveyed believe LGBTQ people make up more than 20% of the United States’ population, and 28% think LGBTQ people account for more than 40% — far more than any realistic estimate. Gallup estimates the actual number is closer to 4.5%.

While 3 in 5 respondents say there is an LGBTQ bar or social space in their area they could easily visit, that figure is far lower in rural areas, where 62% say there is no easily accessible space like that.

Nearly half of LGBTQ Americans say it’s not incumbent on public figures to come out, however, with 53% saying that coming out was their responsibility and 47% saying it wasn’t.

Social media sites like Instagram have a pronounced negative impact on LGBTQ people’s self-esteem and body image, across all demographics, according to respondents. While 21% say platforms like Instagram have a positive effect, double the number (43%) say it has a negative impact. About a third say it had no impact at all. More than any other group, nearly half of lesbians — 48% — report a negative effect, more than three times the 15% who say it had a positive effect.

This may be because, among LGBTQ people, women report higher social media use.

Facebook is the most popular social media platform among LGBTQ people, which 80% report using. On Facebook, 52% of women in the survey (and half of lesbians) check the site a few times a day. That’s higher than the 40% of men (and 37% of gay men) who reported checking it as frequently.

The gender disparity among LGBTQ people is even more stark on Instagram, which 60% of all LGBTQ people use. Forty-six percent of women (and 36% of lesbians) report checking it at least daily, while 31% of men (and 20% of gay men) reported daily use. Far more gay men have never used Instagram (56%) than lesbians (41%).

The survey also asked about public figures, a field that Ellen DeGeneres dominated with 78% of LGBTQ people declaring her a gay icon. She is followed by RuPaul (65%), Lady Gaga (53%), Cher (40%), and Madonna (36%). Taylor Swift made numerous gestures as an LGBTQ ally recently, drawing faint praise (and scorn), but she was seen as a gay icon by just 9% — giving her only slightly more iconic cred than horror movie character the Babadook, who got 6%.