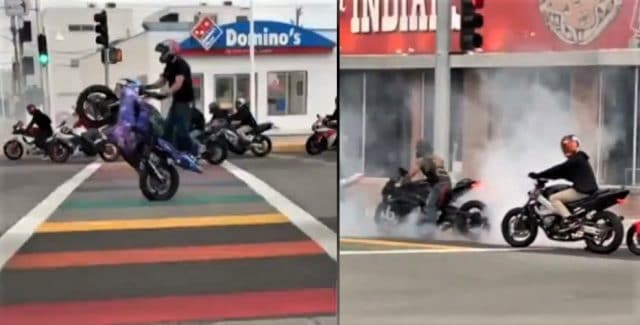 New Mexico police are investigating reports that dozens of motorcyclists vandalized a brand new rainbow-colored crosswalk installed to honor Pride Month, according to the Albuquerque Journal.

The Albuquerque Police Department (APD) is now investigating the act of vandalism as a possible hate crime.

Video of the incident shows dozens of bikers riding over the crosswalk in the middle of town and leaving tire marks from “burnouts” on the freshly painted rainbow crosswalk. One rider even blew out a tire and can be seen walking his bike to the curb.

The vandalism ruined the $30,000 crosswalk just days before the city held its annual Pride parade on Saturday, according to the Albuquerque Journal.

“The facts will determine the appropriate charges, including whether damages amount to misdemeanor or felony charges,” police spokesman Gilbert Gallegos told the newspaper. “City crews attempted to clean the crosswalks today. It is not yet clear whether some portions will need to be re-striped.”

Gallegos said APD’s gang unit is looking into the incident because the video “may indicate the involvement of gang members.”

“They definitely are specifically hitting a symbol of the community and I think that it’s very disappointing they chose to carry out these activities,” APD Deputy Chief Harold Medina told KOB 4.

City road crews attempted to clean up the crosswalk by power washing the tire marks and using a street sweeper.