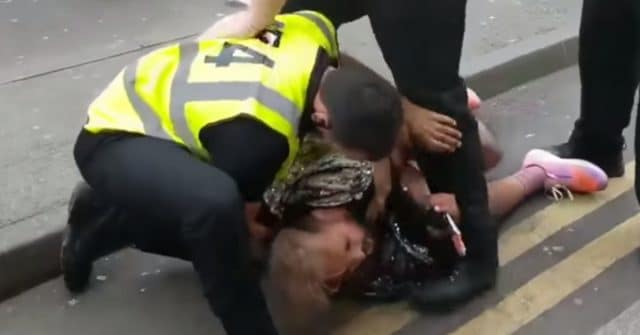 Ferhan Khan, a Muslim LGBT+ activist who was wrestled to the ground by security staff at Birmingham Pride last week, has apologised for his part in the incident.

Khan was tackled by security staff who found him in a ticketed area without a wristband at the event on Saturday (May 25).

Khan had entered the area after marching at the front of the parade with Saima Razzaq and Khakan Qureshi—fellow Muslim LGBT+ activists—and Andrew Moffat, creator of the LGBT-inclusive No Outsiders schools programme.

All three were invited to lead the parade by Pride director Lawrence Barton. Khan had joined them of their own accord.

Speaking to PinkNews, Khan said: “I did indeed gain access to the front of the parade with Saima, Khakan and Andrew.

“It was in the spirit of admiring their good work and my desire to join them in their activism that led me to the front and I should have been more grateful for their hospitality.

“Once we arrived at the ticketed area I was still with them and entered without prior planning or agreement with the organiser.”

A three-minute video published by local news outlet I Am Birmingham shows Khan with Razzaq, Qureshi and Moffat as they are are shown through to the restricted area.

It then cuts to them being tackled and restrained by three security officers, one of whom attempts to block a bystander from filming the incident. Later, an armed police officer is seen looking on as Khan argues with staff over his lack of wristband.

“This is supposed to be about to people but you’ve made it about profits,” Khan is heard saying.

A number of witnesses told PinkNews that Khan had been asked to purchase a wristband before the incident, which they have denied.

“I was waved through and was not offered a wristband at any point,” Khan said.

“I should have just left there and then but I recognised people I knew and was being commended for the work I was doing so I ended up staying.

“After careful thought I realise I made a grave error of judgement.”

Despite this, Khan maintains that the security staff used an “disproportionate and inappropriate” level of force.

“I still have concerns about how I was physically removed and about the tone and conduct of the security company. This deserves to be looked at independently of how the circumstances arose,” they said.

“I welcome the investigation by the Pride organisers.”

Razzaq, from the diversity group Supporting Education of Equality and Diversity in Schools (SEEDS), thanked Khan for their honesty.

She told PinkNews: “Birmingham Pride 2019 marked a momentous historical event when it was led by LGBT+ Muslims for the first time in 22 years.

“Now more than ever our movement must be united if we are to take on homophobia, racism and islamophobia—particularly as we see the rise of the far right across the world. This is something I hope protesters opposing LGBT+ education in schools recognise too.

“It is a credit to Ferhan to acknowledge their error of judgement. I hope they get the answers they need and I look forward to working with them in the future.”

Barton confirmed to PinkNews that an investigation is currently underway.

“Birmingham Pride treats all complaints seriously and will investigate them, where appropriate, thoroughly,” he said on Tuesday (May 28).

“We can confirm that we are looking into this individual case and therefore it would be inappropriate to make any further comment at this time until all the facts are known and the investigation has been completed.”