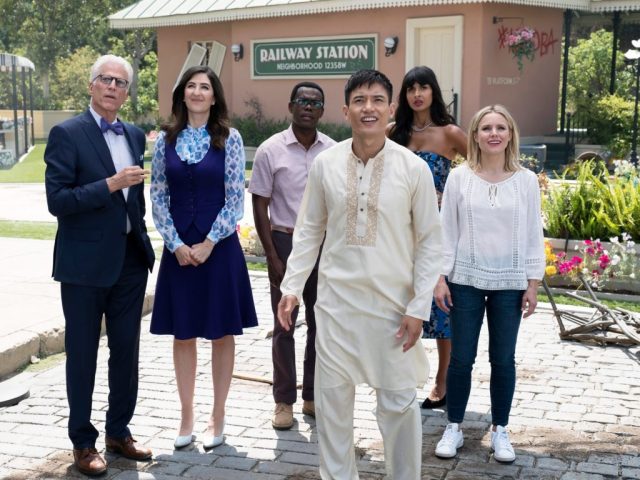 This was announced by creator Michael Schur, who told The Hollywood Reporter (THR) that the show was ‘never designed to be a long-running series.’ Schur is behind other popular shows including Brooklyn Nine-Nine and Parks & Recreation.

The Good Place is a fantasy comedy about ethics and philosophy that was ranked at the top of NBC’s important adults 18-49 demographic. Fans have praised it for its diversity, including hints at a .

‘Obviously because of that DNA, where status quos get blown up so frequently, this is not a show that is destined to be on for nine years,’ Schur THR back in December. ‘It’s not a 200-episode, Friends kind of a deal. It’s not a hangout show. So, yeah, we’ve given it a lot of thought, and we have a certain plan, which I think you’ll get the sense of in the fairly near future.’

The news that season four would be the last for the show came on Friday, 7 June.

Schur opened up to The Hollywood Reporter about his thought process behind ending the show.

‘But it was pretty much always four from early on as a general map. We spent all of season three checking in and making sure that we were pacing things correctly. And there was going to be enough time to do what we wanted but not too much time so that we were running in place. Toward the end of us shooting season three, I told the studio and then we told the network soon after that.’

‘It was completely dictated by the idea and how much juice I thought the idea contained and the pace at which we were letting story unfold and stuff like that. The nice thing about TV shows nowadays is it’s not a forced marathon. You can let the idea dictate the number of episodes that you actually do, which is great for creativity.’

In terms of the cast’s reaction to the news, Schur said the following:

‘They were surprised and saddened. But then quickly not surprised or saddened because it’s been really fun to make this show. They get along really well and have all become really good friends. They’ve have this special journey that they’ve been on and their careers are all exploding.’

‘This has been a very special, highly concentrated thing that we’ve gotten to do for 53 episodes. Because we’re doing 14 episodes this season and doing an hourlong series finale. We’re just chewing up story at an incredibly fast rate. And it immediately makes sense that we would want to get out on our own terms. And not feel like we were throttling back and moving more slowly or deliberately than we have to this point. That just wouldn’t seem like the same show. So we’re going full tilt until the end. Everybody at the end of the day is happy that we’re going to end it the way we started it: at a breakneck speed, with a lot of crazy, wild twists and turns.’