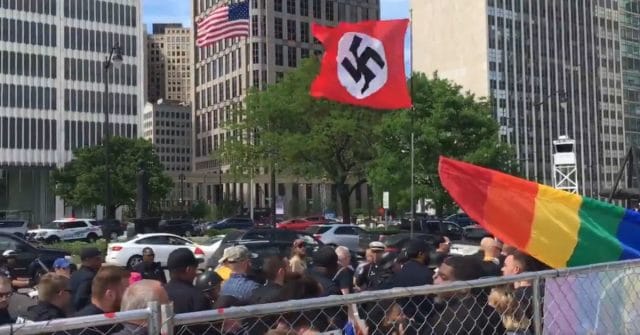 Members of the National Socialist Movement (NSM) turned up in Detroit to protest against the Motor City Pride celebrations.

Police were seen escorting the neo-Nazi group on Saturday (June 8), the first day of Motor City Pride in the city of Detroit.

“Today at Motor City Pride, a friendly LGBT+ event, Detroit PD escorted Nazi’s in full uniform outside of the entrance to the festival,” one Twitter user posted.

“Detroit PD bruised those that tried to intervene and allowed this to happen,” they added.

Video footage showed the NSM group surrounded with police as they walked down the streets wearing flags and clothes with the Swastika sign.

Attendees of the two-day Pride festival could be heard in the background asking the police: “Why are you protecting them? These are literal Nazis.”

<p lang=«en» dir=«ltr» xml:lang=«en»>Today at Motor City Pride, a friendly LGBT+ event, Detroit PD escorted Nazi’s in full uniform outside of the entrance to the festival. Detroit PD bruised those that tried to intervene (see below) and allowed this to happen. pic.twitter.com/lDcbemzhek

Others were heard shouting “our police should be protecting us” and “how come they get protected and we’re not”.

Another video of the group featured crowds chanting “who do you protect, who do you serve” to the police surrounding the neo-Nazi protesters.

One user took to Twitter to say: “How lovely to see people yelling “white power” and “f*ck you f*****” at Motor City pride. I see they’re really taking their #PureMichigan slogan to a whole knew level.

Twitter users asked why the neo-Nazi group were given police protection. (Twitter/@mrose220)

The protests came as it emerged that Burt Colucci, self-identified ‘commander’ of the neo-Nazi group, had posted details of the protest on Russian social network VK in April.

“NSM will be armed and counter-protesting the freaks,” Burt Colucci’s post said.

“NSM, lets put some boots on the ground!!! I don’t really give a damn about op-sec or Antifa in this situation. We go in with Swastikas blazing and if people don’t like it, tough s**t…”

In a post on Sunday (June 9), Colucci said: “We told the police we didn’t need or want them there, they insisted.”

He added that he would be posting bodycam footage shortly.

Motor City Pride concludes today (June 9) at Griswald Street, Detroit. It is not yet known if the protesters will return.