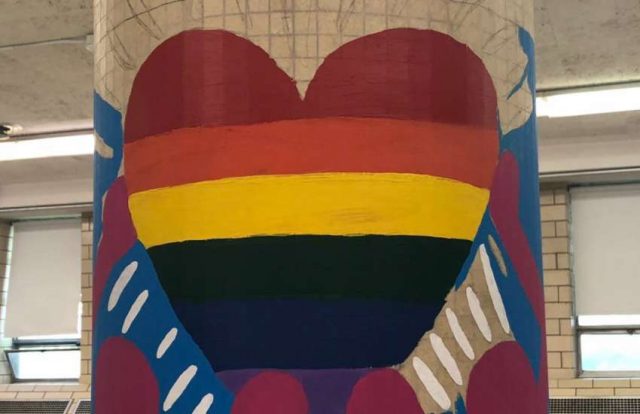 A school in New Jersey that sparked controversy last month for covering an LGBTI mural will become one of a handful of schools to adopt inclusive lessons it was announced today (13 June).

The Bergen Arts and Science Charter School in Hackensack will become one of the first schools in the state to join a pilot program to develop LGBTI-inclusive curriculum,

This comes less than a month after a student-painted mural in support of queer rights was painted over to comply with the school’s lease from the church that owns the building.

The school has partnered with Garden State Equality, and LGBTI advocacy group, to curate an

Furthermore, it’s part of a wider partnership that focuses on diversity and inclusion.

‘The curriculum test-pilot will be an opportunity for us to become a leader in this work,’ said Nihat Guvercin, lead person and chief executive officer of iLearn Schools, a charter management organization that operates Bergen Arts and Science.

‘We’re proud to participate with Garden State Equality to do that.’

The agreement comes just after building owners ordered school officials to cover up a mural hand-painted by a student.

The mural, on a column inside the cafeteria, consisted of a rainbow heart and figures with interlocking circle and arrow symbols that represent the male gender.

But Holy Trinity Church, a Roman Catholic institution, own the school building. According to North Jersey.com, Reverend Pail Prevosoto, pastor of the church, objected to the mural.

He explained that the church often use the cafeteria as a space for social functions. As a result, faculty covered the mural up.

Charter schools are public schools that are privately managed. However, unlike traditional school districts, they cannot get state money.

Moreover, since the mural controversy, the painter behind the mural posted a sign where the mural was that stated: ‘I’m still here. I’m still queer.

‘Nothing anyone can do will change that. Love everyone, love yourself. That’s what will fix the world.’

Other students have singed their names underneath it.

Garden State Equality partnered with Make It Better for Youth. Armed with $185,000 in grant funding from the Braitmayer Foundation and PSEG Foundation to carry the test-pilot program.

The group will provide coaches to train educators in each participating school.

‘To the school’s credit, the administration unequivocally embraced the positive and constructive solutions proposed by students and educators during our dialogue.’