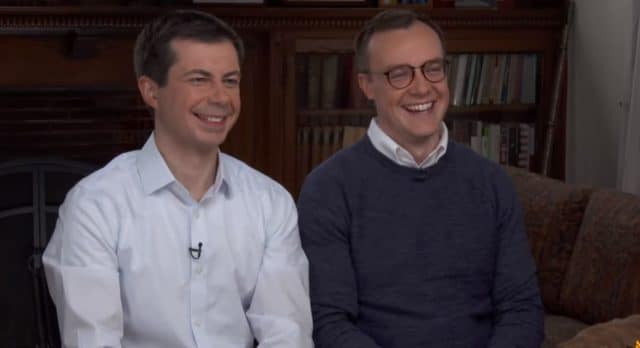 The owner and editor-in-chief of The New Republic apologized for a vulgar and homophobic op-ed published Friday that attacked presidential candidate and South Bend, Indiana, Mayor Pete Buttigieg, and made broad assumptions about the mayor’s personal life.

Dale Peck’s post titled “My Mayor Pete Problem” described Buttigieg as “the gay equivalent of Uncle Tom,” and repeatedly referred to the presidential candidate as “Mary Pete” throughout the column.

Peck argued that because the mayor waited until his early 30s to come out as gay, he would be too preoccupied with sex and drugs to be an effective president. Peck went on to speculate about intimate details of Buttigieg’s personal life.

Here’s a taste of the now-deleted piece:

All this makes Mary Pete different from every other left-leaning neoliberal in exactly zero ways. Because let’s face it. The only thing that distinguishes the mayor of South Bend from all those other well-educated reasonably intelligent white dudes who wanna be president is what he does with his dick (and possibly his ass, although I get a definite top-by-default vibe from him, which is to say that I bet he thinks about getting fucked but he’s too uptight to do it). So let’s dish the dish, homos. You know and I know that Mary Pete is a gay teenager. He’s a fifteen-year-old boy in a Chicago bus station wondering if it’s a good idea to go home with a fifty-year-old man so that he’ll finally understand what he is. He’s been out for, what, all of four years, and if I understand the narrative, he married the first guy he dated. And we all know what happens when gay people don’t get a real adolescence because they spent theirs in the closet: they go through it after they come out. And because they’re adults with their own incomes and no parents to rein them in they do it on steroids (often literally). If Shortest Way Home (I mean really, can you think of a more treacly title?) makes one thing clear, Mary Pete was never a teenager. But you can’t run away from that forever. Either it comes out or it eats you up inside. It can be fun, it can be messy, it can be tragic, it can be progenitive, transformative, ecstatic, or banal, but the last thing I want in the White House is a gay man staring down 40 who suddenly realizes he didn’t get to have all the fun his straight peers did when they were teenagers. I’m not saying I don’t want him to shave his chest or do Molly or try being the lucky Pierre (the timing’s trickier than it looks, but it can be fun when you work it out). These are rites of passage for a lot of gay men, and it fuels many aspects of gay culture. But like I said, I don’t want it in the White House. I want a man whose mind is on his job, not what could have been—or what he thinks he can still get away with.

The article was removed from the outlet’s website on Saturday and replaced by an editor’s note explaining that the post was removed “in response to criticism of the piece’s inappropriate and invasive content.”

“We regret its publication,” the note added.

In a lengthier statement Saturday afternoon, TNR’s editor-in-chief Win McCormack extended his publication’s “sincerest apologies” to the mayor, adding that the piece was “inappropriate and offensive.”

“We have high standards at The New Republic, but sometimes we fall short,” McCormack added in the statement released through Twitter.

“Yesterday we made a mistake, but we remain committed to honoring the tradition of high standards and journalistic integrity that have been the hallmark of The New Republic for more than 100 years,” he continued.