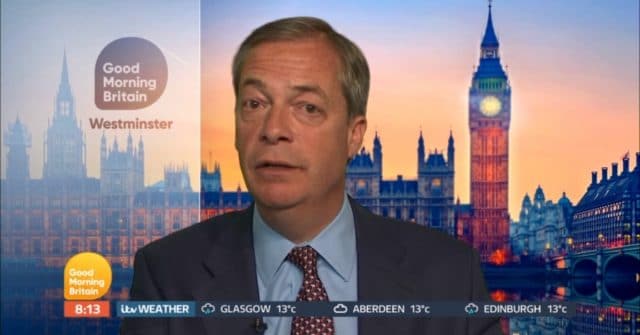 Nigel Farage has rejected calls to discipline Brexit Party MEP Ann Widdecome, after she claimed that a cure for homosexuality could be possible.

The newly-elected Widdecombe has faced anger for claiming in a Sky News interview on Sunday (June 2) that “science may yet produce an answer” for people to “switch sexuality.”

Asked about the remarks, the leader appeared to reject calls for disciplinary action against Widdecombe.

Farage said: “Science may provide all sorts of answers that you and I don’t know about. Ann Widdecombe is a devout Christian and there is nothing wrong with that in my opinion… she will have views on abortion, on homosexuality that are very different to those held by many others.

“I think these things are matters of conscience, I don’t think they’re matters for party leaders to support or condemn.”

Farage added: “There are millions of people out there who are practising Roman Catholics in this country… in a free society, tolerance needs to be a two-way street. I do think devout Christians should be allowed to have their opinions.”

Pressed again, the Brexit Party leader continued: “I will take no stand on this whatsoever. I believe in issues of conscience.

“I will not personally support or condemn for their views on abortion, on homosexuality, on issues of conscience.”

Asked about his own personal views, Farage said he does not believe homosexuality is a sin, adding: “I very much doubt human beings can be cured of anything. I think we’re born the way we are, and we tend to stay with our characteristics for the whole of our life.”

Nigel Farage responds to Ann Widdecombe’s comments that science could provide an answer for homosexuality. He says he ‘won’t support or condemn’ individuals on ‘issues of conscience’. pic.twitter.com/u4kziOLIPL

Farage directed questions about the party’s views on LGBT+ issues to its only out representative, MEP for Scotland Louis Stedman-Bryce.

Stedman-Bryce defended Widdecombe, claiming on Twitter that her comments “are nothing to do with homophobia, but about compassion and concern for those who find themselves conflicted, concerned and troubled.”

He added: “Sadly the knee-jerk reaction of some towards those that hold different views is more witch hunt than tolerance based. It is not Ann who is carrying a pitchfork.”

Widdecombe’s comments have been widely condemned.

Mayor of London Sadiq Khan said: “She may have changed her party, but she hasn’t changed her stripes. Ann Widdecombe is still peddling homophobic, bigoted, anti-LGBT and anti-science nonsense.”

Gay ex-Conservative MP Nick Boles added: “If only science could produce an answer to the blight of poisonous bigotry that is Ann Widdecombe.”

Kim Sanders of Stonewall said in a statement to PinkNews: “It is sad that at the start of Pride month, as we celebrate 50 years since LGBT people started a movement to secure equality, views like this are still held by people in public office.

“Suggesting that science should find an ‘answer’ to same-sex attraction supports the view that being lesbian, gay, bi or trans is something that needs to be – or can be – cured, which is absolutely untrue.

“We know that so-called gay cures are completely ineffective and often extremely harmful to the people they claim to help.

“Diversity is something that should be embraced and celebrated, which is exactly what we’ll be doing this Pride month.”

Widdecombe’s comments were far from a one-off.

In 2018, she criticised Prince Harry and Meghan Markle for expressing their support for the decriminalisation of homosexuality across the Commonwealth.