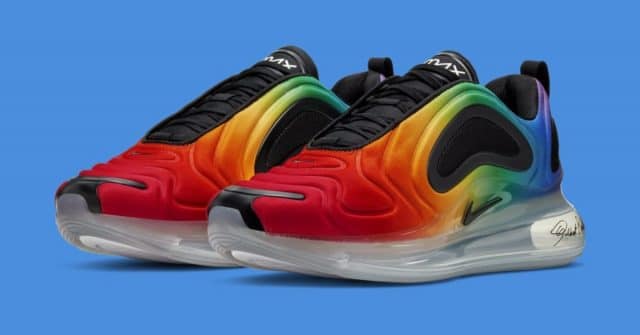 As part of its ‘Be True’ range, the shoes feature a rainbow gradient that goes from pink, red and orange through to blue and purple with the brand’s signature Swooshes in black on both sides. They also have a black tongue with bubble-effect, translucent midsoles that have Baker’s signature printed on the outer edge.

If you like the idea of queering up your footwear but are partial to a trainer shape that’s a little less ‘out-there’ then fear not, as Nike has also announced that the classic style Air Max 90s are part of the collection too.

Nike’s Air Max 720s feature heel pull-ups that have the collection’s slogan, ‘Be True’ written on them (Nike)

On top of a black, white and grey base that consists of rubber and a leather-effect material, the shoes features eight ticks that each representing a different colour from Baker’s flag. The midsoles have yellow accents on them, while the tops of the sneakers have purple, pink, green and orange sections. The sole tips are bright blue and if that’s not enough for you, then you’ll be glad to know that the trainers come in a multi-coloured, stripey shoe box too.

The range also includes a children’s edition, the KD 10, which are all black apart from yellow Swooshes and a rainbow-colour translucent sole.

Air Max 90s were also given a rainbow redesign (Nike)

All sets will be available to purchase from Saturday 1 June to coincide with LGBT+ pride month. If you’re planning on getting a pair, the Air Max 90s will set you back $140 while the Air Max 720s are even pricier at $180. Pity Nike didn’t give us more time to save up some pennies…

While they don’t seem to be coming to the UK anytime soon, various sneaker sites suggest that the range will be sold by online retailers such as SNS, Asphalt Gold, Overkill and Afew, as well as from Nike directly.

Nike isn’t the only fashion corporation tying their latest designs in with pride this year. Last month, Converse revealed it was bringing out a collection of trainers that were inspired by both the Pride and the blue, pink and white transgender community flags.

Elsewhere, Adidas also announced that it had giving four of its classic trainer styles rainbow redesigns to celebrate pride month.