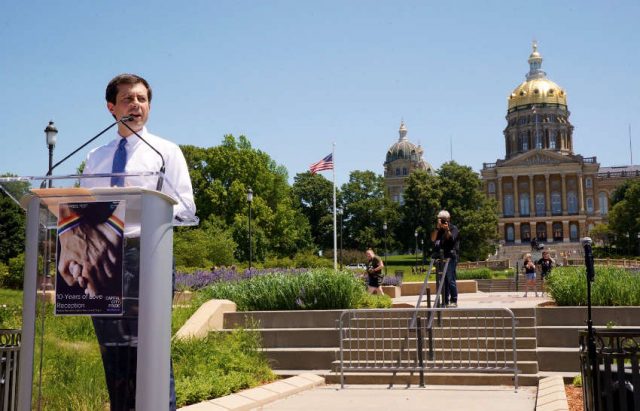 Presidential candidate Pete Buttigieg has said there’s ‘no going back to normal’ in the ongoing fight for LGBTI equality.

Buttigieg, the only openly gay Democratic presidential hopeful, also warned that LGBTI rights were threatened by US President Donald Trump.

The mayor of South Bend, Indiana, made the comments while speaking at an Iowa Pride festival on Saturday (9 June).

He told the crowd to avoid falling into complacency and to actively work towards enhancing LGBTI rights.

A recent survey also found that Buttigieg has risen in the polls among Democratic voters.

The Iowa poll found that Buttigieg had slightly closed the gap with the current frontrunner, former Vice President Joe Biden.

Addressing the Pride crowd on the steps outside the Iowa state capitol in Des Moines, .

‘Don’t listen to anybody in either party who says we can just go back to what we were doing,’ Buttigieg said.

‘We know that the struggle is not over, not even close. At a time like today when you can still be legally fired in so many parts of this country because of who you are or who you love, we have work to do,’ he added.

The event marked the 10th anniversary of the Iowa Supreme Court’s decision to overturn a ban on same-sex marriages.

Buttigieg also said that the LGBTI community should welcome people who have changed their minds towards LGBTI rights. This includes former President Barak Obama, who only came out in support of same-sex marriage in 2012.

‘There are millions of Americans who today are not proud of what they believed yesterday about us, but we ought to make them proud of the fact they came on to the right side of history,’ Buttigieg said.

He added that people who had experienced discrimination because of their sexuality or gender identity could help lead the way to a more inclusive society. He also threw in a reference to Trump’s 2016 campaign slogan.

‘We in the LGBTQ community know when we hear phrases like ‘Make America Great Again’ that that American past was never quite as great as advertised,” Buttigieg said.

Buttigieg joined a number of Democrats attending the event, including several other presidential hopefuls.

Buttigieg also spoke at a dinner in honor of Matthew Shepard, a Wyoming college student who was beaten to death in a homophobic attack in 1998.

A handful of the Democratic candidates also spoke at a presidential forum.

Almost all the candidates expressed their support for the pro-LGBTI rights Equality Act. The wide-ranging bill is designed to ban discrimination based on sexual orientation and gender identity.

The bill seeks to  and would add sexual orientation and gender identity to the list of protected traits.

The bill is soon to be voted on in the Senate.

The speakers also condemned Trump’s ban on trans people serving in the US military. The ban, which has been widely denounced by leading Democrats, .

The Democrat’s appearances at the Pride festival is part of a series of political events taking place in Iowa over the weekend.

Iowa will kick off the state-by-state race when candidates begin vying for the Democratic presidential nomination in February 2020.

A recent survey of Iowa caucusgoers found that Buttigieg was rising in the polls, .

Buttigieg was polled 14% from a recent survey.

This places the candidate virtually neck-and-neck with Vermont Senator Bernie Sanders, who was polled at 16%, and Massachusets Senator Elizabeth Warren, who gained 15%.

The current favorite remains Biden, who polled at 24%.

However, there have been significant shifts in the polls since the beginning of each Democrats’ presidential campaigns.

In March, Biden and Sanders dominated the field, polling respectively at 27% and 25%. At the same time Warren polled at 9%, and Buttigieg at only 1%.

A survey from May also found that .

However, the poll came with a caveat. Despite expressing support, very few people thought a gay president would be elected in the foreseeable future.