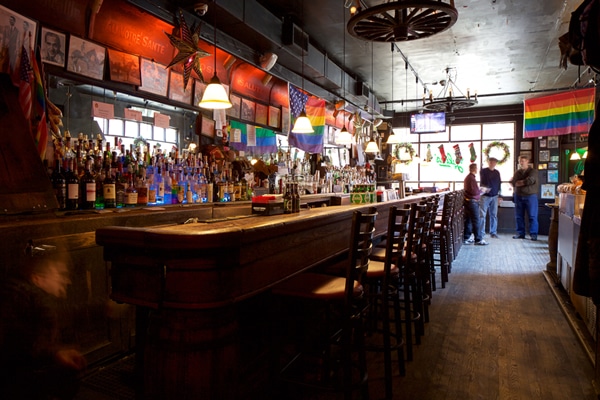 Greenwich Village gay bar Julius’ is part of gay rights movements in the 60’s when homosexuals and lesbians weren’t served alcoholic beverages “since their presence was considered de facto disorderly.”

In 1966, three members of the gay rights organization Mattachine Society embarked in an action meant to change the legal landscape that wasn’t allowing gays and lesbians to have alcoholic drinks in bars. Since then the action is known as “sip-in at Julius’.”

So they went to Julius’ and after ordering drinks they said they were gay. The bartender refused to give them the drinks. “Their intent was to challenge New York State Liquor Authority regulations that were promulgated so that bars could not serve drinks to known or suspected gay men or lesbians, since their presence was considered de facto disorderly,” a statement released this week by the National Park Service says.

Last month, New York Governor Andrew Cuomo suggested that the bar should be registered to the National Register of Historic Place:

“These landmarks are a part of our rich and storied history and helped define what it means to be a New Yorker. By placing these landmarks on the State and National Registers of Historic Places, we are preserving their legacies and ensuring that they will be enjoyed for generations to come,” the governor said.

On Wednesday, The National Park Service has officially added the Greenwich Village gay bar Julius’ to their list of historical sites.

“Scholars of gay history consider the sip-in at Julius’ as a key event leading to the growth of legitimate gay bars and the development of the bar as the central social space for urban gay men and lesbians,” the Park Service wrote in their statement.

“We’re thrilled that it is officially listed and that the National Park Service added another site recognizing LGBT history and allowing LGBT history to stand alongside American History,” said a representative of New York City LGBT Historic Sites Project.