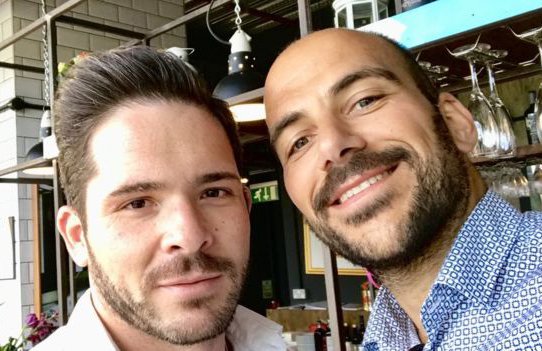 The attack was carried out by three men who were all shot dead by police within minutes of their deadly rampage. It is being treated as a terrorist incident.

None of the victims have yet been named while next of kin are informed, but more details are emerging of how events unfolded. Stories are also beginning to emerge of acts of bravery and heroism.

One of the attackers entered the restaurant and stabbed a woman in the chest.

‘He came in shouting and just stabbed her,’ Sagristani told the BBC.

Other diners threw chairs at the attacker, forcing him to retreat out of the restaurant.

Pinto and another friend, also a nurse, attended to the woman. They watched over her for two hours while waiting for paramedics.

‘They took some ice and cloths and tried to stop the bleeding. She lost half a liter of blood in the beginning. He was keeping pressure on the wound,’ said Sagristani.

‘After the initial moment of panic, everyone tried to help this girl and stay calm. We were all at the back of the restaurant. There were shots going off outside and we didn’t know what was going on.

‘They kept her conscious. It was very lucky they were there.’

Contacted by GSN, Sagristani saud, ‘It was a difficult night but thankfully we were safe. Carlos and his friend kept the girl alive. We believe she made it but we don’t have any more news about her.’

It’s known that one of those stabbed and badly injured in the attack was an off-duty policeman. He tackled one of the attackers and is now in a critical condition in hospital.

A British Transport Policeman was also injured when he attempted to tackle the attackers armed only with his baton.

Met Police commissioner Cressida Dick praised the ‘extraordinarily brave actions by officers on and off duty first on the scene.’

The manager of a local McDonalds closed the store and gave food and drink away to emergency service workers.

Many Londoners close to the scene posted messages on social media offering accommodation for the night to anyone in danger or struggling to get home. There are also reports of taxi drivers offering free rides to people out of the area.

Prime Minister Theresa May condemned the attacks, telling the press this morning, ‘It is time to say enough is enough. Everybody needs to go about their lives as they normally would. Our society should continue to function in accordance with our values. But when it comes to taking on extremism and terrorism, things need to change.’

She said that the UK is ‘experiencing a new trend in the threat we face.’

The attack comes two weeks after a lone man armed with explosives killed 22 people attending an Ariana Grande concert in Manchester, and two months after another man drove his car into pedestrians on Westminster Bridge, killing five.