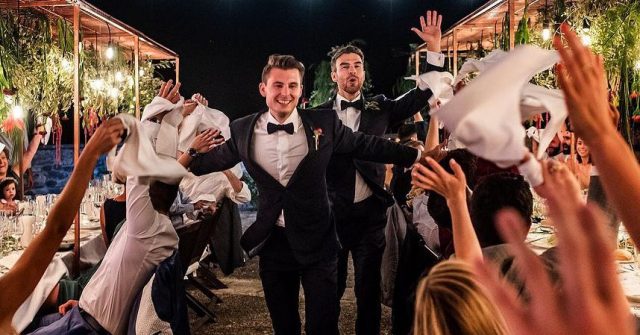 Add two more gay athletes to the growing list of LGBTQ people in sports getting hitched.

Eric Radford and Luis Fenero got married last week in northern Spain, near where Fenero was born. The two figure skaters got engaged just over two years ago when Radford proposed on one knee not far from where the two men would eventually marry.

Last year Radford lit up the ice in South Korea, winning two medals — one gold, one bronze — at the 2018 Winter Olympics with skating partner Meagan Duhamel, who was also at the wedding. Fenero is a former national champion in Spain with ice dancing partner Celia Robledo.

Not only is Spain Fenero’s birthplace and the country he represented competitively on the ice, but it was also one of the first countries to legalize same-sex marriage, in 2005.

Congratulations on tying the knot, guys! Having been with my partner for over 16 years I can tell you the secret to longevity: Make the choice every day to be together forever, and you will be.