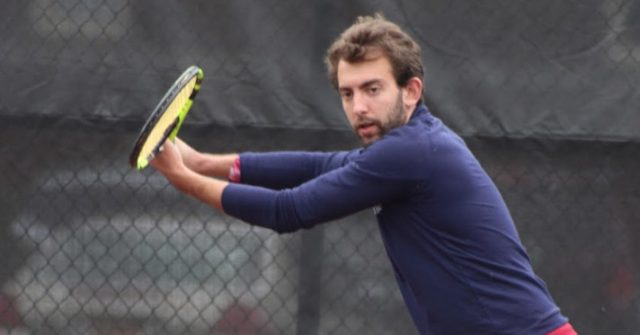 It was mumbled just quietly enough that only I could hear it. Although it was not directed at me, it still felt like a slap to the face.

The slur was uttered by my doubles partner to demean our opponents, in response to being annoyed by them.

This summer, I am on multiple USTA teams for the tennis club where I am coaching. For a recent match, one of the other counselors at the summer camp and I had decided to team up to play in the No. 1 doubles spot.

I had not yet told him that I was gay. I had never felt too compelled to come out to him. I did not think it was a significant part of the friendship we were building. I knew that he was friends with our openly gay friend who would be playing No. 1 singles on the next court over.

“Don’t say that,” I said to my doubles partner after he uttered the slur, angered by his use of the word as our gay friend in his singles match. I then said to him, “Also, I am gay.”

I told him that I was fine. But I wasn’t.

He was immediately apologetic and said he did not know that I was gay. I could see the look of regret and guilt in his facial expression. I told him that I had heard homophobic slurs countless times and not to worry about it. I wanted us to focus on beating our opponents. So I told him that I was fine. But I wasn’t.

I tried to regroup for the next point and concentrate on the match. But I worried whether or not my partner’s performance level would hold up and if he would lose concentration after what had happened.

There was also something else for me to worry about — myself.

Doubles is a game of trust between partners. But I felt alone out there for the majority of the match. Instead of focusing on my tennis game, I was fighting multiple battles psychologically that undermined my performance.

Not only had I grown to resent my opponents throughout the match due to their multiple snide remarks directed our way, I was uncomfortable in my own skin due to the use of the homophobic slur.

I was full of negativity and mentally drained. I simultaneously had lost confidence in my tennis game and my identity. I was trying to win a match that I could not win on my own, without fully working with my partner.

After not converting on two break point opportunities on our opponent’s serve to win the first set 6-4, I continued to spiral downward.

I usually have a short term memory on court and move right to the next point, but on this day I was extremely emotional about my missed opportunities.

I allowed this frustration to influence my performance in the rest of the set and match. During the second set, I thought about packing up my tennis bag and leaving the match, mentally checked out before it had even ended. We would not win another game for the rest of the match, losing 7-5, 6-0.

While I have grown much more comfortable with my sexuality over the years, the incident had provoked feelings of tension and anxiety regarding this part of my identity that I still often struggle with.

I have already came out to countless people privately and publicly; and I have received numerous positive responses and overwhelming support. Still, I never actually feel like I am truly “out.”

Due to my mannerisms and my masculinity, one of the first assumptions others make about me is that I am heterosexual.

Being “straight passing” is a privilege in a number of ways. But it can also be very tiring for me. I constantly feel the need to decide whether or not I should come out to others when they assume that I am heterosexual. Unless I begin to walk around with a badge on me saying that “I am gay,” I know that people will continue to make this assumption about my sexuality.

Throughout the last few weeks, I had thought about finding ways to casually come out to some of the other male tennis counselors that I am working with this summer. One of the tennis instructors running the summer camp — and a long-time member of the staff at the club — is openly gay (the one who would be playing singles when my doubles partner said, “faggots”).

I had told myself that there would be no issues with me coming out to the people I am working with. Unfortunately, often when I do not actively make the effort to come out to those I meet, I run the risk of eventually enduring homophobic slurs and uncomfortable conversations where I am presumed to be straight.

When reflecting back on the use of the homophobic slur by my doubles partner, I am not completely surprised that he would use such language. It was another one of many disappointing moments for me that I feel captures my struggles as a “straight passing” person.

My partner did not know that I was also gay. So while we were only a court away from my openly gay friend, I felt as if I was existing in a completely different space than him — one where I was a part of a heterosexual “bro” culture, where slurs such as “faggot” are tossed around by straight men when they think that that there are no queer men around.

Much more work is still needed from allies for them to be more faithful to their allyship.

It is experiences such as this one that reveal to me — and should demonstrate to all of us — how much more work is still needed from allies for them to be more faithful to their allyship, in order to truly build trust with LGBTQ+ individuals and for them to be there to support us.

Allyship does not solely consist of being supportive to an LGBTQ+ friend when they are in the room.

Being an ally does not solely mean showing up to Pride one day in the year.

It means having an intention behind and being conscientious of your words and actions in order to create inclusive spaces, no matter who you are with or what situation you find yourself in.

It is my hope that we can all make a more conscious effort to not use stereotypes to make assumptions about the identities of others that can be harmful to them.

Despite the difficulties of others assuming that I am something I am not, and despite enduring homophobic slurs that make me feel that I am less than my straight peers, I will still strive to be proud of who I am.

Nick Lee is a recent graduate from Vassar College (Class of 2019) where he majored in Psychology and Hispanic Studies, and was a four-year member of the Vassar men’s tennis team. He was also a member of Vassar’s Queer, Trans, and Non-Binary (QTNB) Student-Athlete Working Group. He was born and raised in New York. After teaching English in Madrid from October 2019 to June 2020, he aspires to return to school to pursue a career as a sports psychologist and continue playing tennis competitively. He can be reached by email at Nilee27@aol.com, on Instagram @nicklee.aka.licknee, and on Facebook as Nicholas Lee.