Home Gay Life On the front line of digital activism 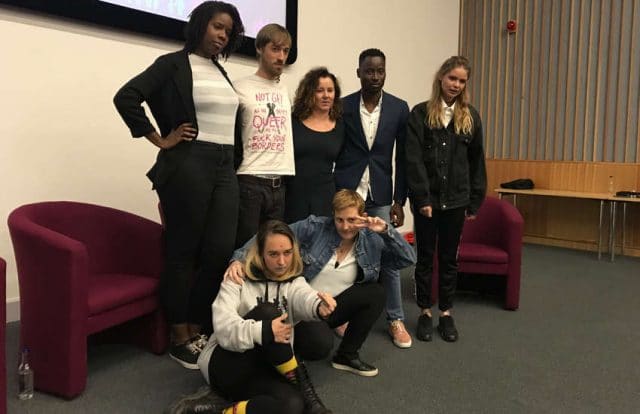 Leading LGBTI and human rights activists shared tactics and advice for getting messages across and surviving in the digital world.

Together, they used social media platforms to cause ‘positive disruption’ in the name of human rights.

For Bisi Alimi, a Nigerian LGBTI and HIV rights activist, digital activism is both a battleground and a place of empowerment.

Alimi shared his experience of appearing live on television with his husband in Nigeria, where a prohibition of same-sex marriage act bans homosexuality with up to 14 years in prison.

He said footage of the interview went viral on Twitter. The exposure then scared the government enough for them to try to shut down the TV station.

‘Sometimes, I post to cause trouble’ Alimi explained of his social media strategy. ‘I have always used the opportunity social media gives’.

‘Whenever I see a hashtag, I just creep in. I look for what is trending and try to hijack it to get my message across’ he also said.

Josh Connor of Lesbian and Gays Support the Migrants (LGSM) Bristol said social media allowed him to share first-hand experiences with as many people as possible.

He cited an example of migrant activists sharing a live feed as they chained themselves under a plane’s wheels to stop a deportation.

In 2019, LGSM set up bots on Tinder to open discussions about migrant rights and deportations.

‘We can subvert the expected usages of social media for our activism’ he explained.

Two members of Russian feminist protest band, , explained how they used social media for their protest art at the World Cup final in Russia in 2018.

Members of the band were able to record their mini manifesto in police uniforms before they famously invaded the pitch.

Connor shared his experience of how people use social media to ‘expose’ or ‘dox’ activists.

‘Freedom of speech comes with responsibility’ he also explained.

Alimi said he often retweeted abuse he received and let his fans argue with the troll. ‘They want to be famous’ he explained.

He also said he used Instagram to relax. ‘I tend to follow accounts with photos of dogs and puppies’ he told the audience.