Home Gay Life Out footballer Collin Martin says there “has to be more” gay pro... 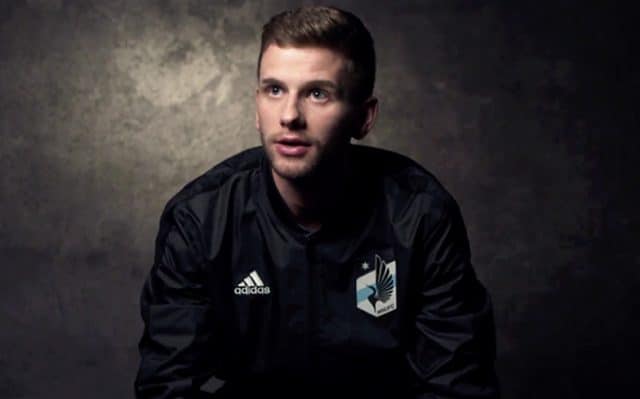 The Minnesota United soccer player, who came out as gay during Pride Month last year, delivered a video message about Pride for Major League Soccer’s initiative Soccer For All, which aims to make the sport more inclusive.

In the video, Collin said his coming out journey was a “difficult” one, but stressed that he only got “support” and “good feedback” from his teammates and the League when he told them about his sexuality.

“I felt like I needed to share it with the rest of the world and hopefully be an example for people that don’t have that,” he said.

“When you make a public statement like that, you’re not doing it for yourself really. I was truly doing it just to be an example for young kids or people that were maybe unsure of their sexuality or didn’t know their place in sport.”

He continued: “I don’t think I’d be here today if it wasn’t for the League’s push to be inclusive. And the fans too, because they’re important. Ive never felt uncomfortable being in the stadium or like I’d be heckled for being who I am.

“I’m sure there is still some type of negative culture out there in sport, but my experience personally has been really positive, and it’s definitely a product of not only my team, Minnesota United, but also the League.”

Collin went on to say he believes that there are more gay footballers out there, and that he hopes they’ll be able to come out soon.

“There has to be some more gay footballers,” he said.

“Hopefully we’ll see more change soon, and then we won’t be having this conversation in a couple of years.”