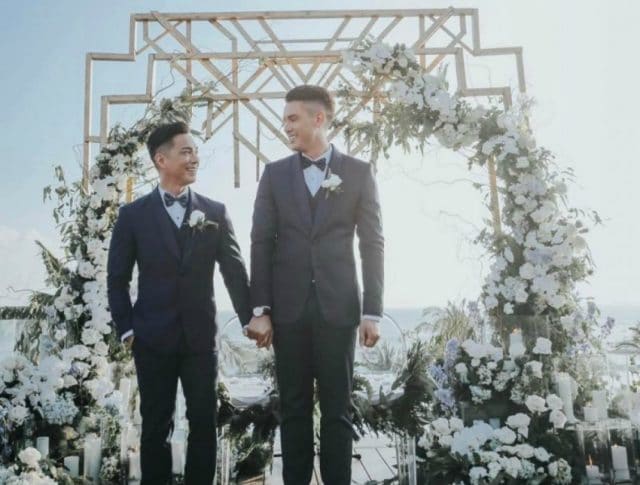 And no, it’s not because they’re really, ridiculously good looking

Libiran is one of the Philippines leading fashion designers who wed his longtime boyfriend Jacobs in a stunning ceremony on Borocay Island last week.

American born Jacobs works as the President and Chief Operating Officer of Libiran’s bridal label.
The couple met in Paris and are very loved-up after their nuptials.

‘I will cherish you every day for the rest of my life. I will wake up beside you and thank God for the biggest blessing He has ever given to me,’ Jacobs wrote on Instagram.

‘The world may not always be for us, but my world will always be you.’

Their wedding photos were soon plastered all over social media with homophobes using it as an opportunity to criticize the couple.

‘Remember, God created man and woman only. This is against the will of God,’ one person said online.

‘That’s not love. That’s homosexuality! Homosexuality isn’t love at all,’ said another.

Not equal in the eyes of the law

While there are moves to improve the lives of LGBTI people in the Philippines, same-sex marriage is not recognised.
Last week Filipino President Rogdrigo Duterte reversed his longtime of support for marriage equality saying because it was as a Roman Catholic country, the Philippines could not support it.

The couple are planning to also get married in the United States, so that their union is legally recognized.

We think the boys are amazing and congratulate them on their marriage. Let’s forget about the haters and bask Libiran and Jacobs’ perfection.

Pre-nuptial photos on the Mekong Delta