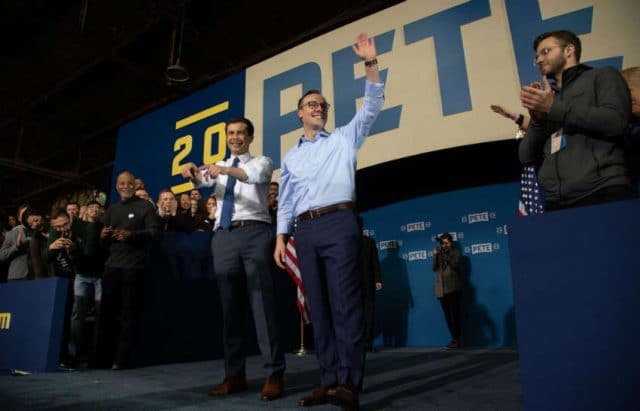 The presidential hopeful took the opportunity to call out Trump for his administration’s poor record on LGBTI rights.

‘Even though they’re paying lip service to the idea of – like the president was asked about my marriage, so he could have the opportunity to say he’s fine with it,’ Buttigieg said.

Buttigieg made the comments at an event in Iowa where he was discussing his book, Shortest Way Home.

The Democrat was referencing an interview Trump gave to Fox News show, The Next Revolution. ‘I think it’s absolutely fine. I do,’ Trump said when asked about Buttigieg’s same-sex marriage.

The president agreed with interviewer Steve Hilton that Buttigieg’s candidacy shows progress in the US.

However, Buttigieg was quick to zero in on the Trump administration’s policies with regards to LGBTI rights.

He referenced a recent Daily Beast report which says that adopted children from LGBTI families could be considered to be born ‘out of wedlock’. This could mean they will not automatically receive US citizenship, even if their parents are married US citizens.

‘We find out this week that they changed the State Department guidance,’ Buttigieg said, according to ABC.

‘So if you are, for example, in an international adoption scenario, and you’re a same-sex couple, as far as the United States government is concerned, you have a child born out of wedlock. Think about what that means.

‘It means you are not a citizen of the same country as your own child at the time that they are born. And that’s discrimination.’

This is not the first time Buttigieg has called out senior government officials with regards to LGBTI rights.

In the past months, Buttigieg has lambasted Vice President Mike Pence because of attitude towards LGBTI rights.

Pence has stated in the past that LGBTI rights go against his Christian beliefs. However, Buttigieg – who is a devout Episcopalian – has made clear he rejects Pence’s interpretation of Christan teachings with regards to LGBTI rights.

GLAAD’s Trump Accountability Project has tallied the number of times the White House has made anti-LGBTI statements and actions since taking office.

At the time of writing, this number stands at 107 occasions since the government came to power 849 days ago.

The administration has a particularly woeful record when it comes to trans rights.

The Trump administration’s poor record on LGBTI rights stands in contrast to ever-growing LGBTI support within the Democratic party.

This week saw the Democratic-controlled House vote in the Equality Act, a wide-ranging bill which widens anti-discrimination protections for LGBTI people.

Democrats took control of the House in the 2018 midterm elections, which saw a record number of LGBTI politicians being elected to office in what many commentators described as a ‘pink wave’.

High-profile members of the Democratic party have also been vocal about their support for LGBTI rights. This includes fellow presidential hopefuls, Senators Cory Booker, Kamala Harris, and Bernie Sanders.

Recent polling has also suggested that an increasing number of Americans would be willing to vote for a gay man in future presidential elections.