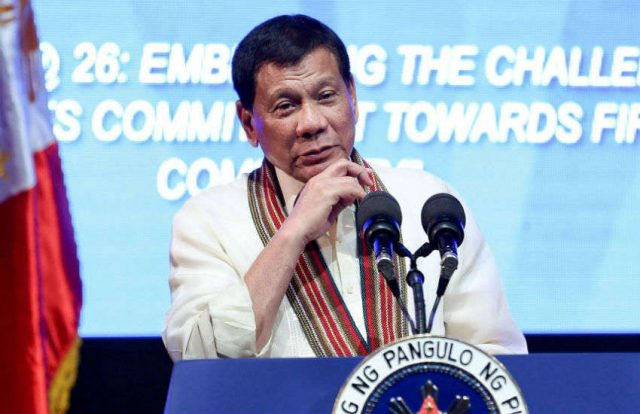 The Philippine President’s office has defended Rodrigo Duterte’s that he used to be gay but ‘cured’ himself.

At a meeting with the Filipino community in Japan on Friday (31 May), Duterte said he ‘became a man again’ when he met his now ex-wife.

, a gay and transgender advocacy group, labeled the comments dangerous and retrograde.

But on Tuesday (4 June), presidential spokesperson Salvador Panelo said the LGBTI community should be ‘glad’ about Duterte’s remarks.

‘The remarks meant that he had ‘changed’ his sexual preferences,’ Panelo said, according to . ‘What’s wrong [with that]?’ He also reportedly asked.

‘Let me say that the President is always conscious of not offending the sensibilities of these special classes. He is a kind person,’ Panelo also said.

According to , he then stated: ‘I said: “Are you sure?” They said: “You ask any gay person who sees Trillanes move, they’ll say he’s gay.” No wonder.

‘Good thing Trillanes and I are similar. But I cured myself,’ Duterte then remarked.

He also added: ‘When I began a relationship with [Elizabeth] Zimmerman, I said, this is it. I became a man again.’

Zimmerman is the Duterte’s ex-wife. They annulled their marriage in 2000.

Duterte, often called the Donald Trump of the East, is known for his foul mouth and

Last year, he claimed 90% of Catholic priests are gay. He also once said convicted criminals acquire ‘latent homosexuality’ in jail.

Gay sex is legal in the predominantly-Catholic Philippines. But, the government does not recognize same-sex unions.

In the lead up to the Philippines presidential elections last month, Duterte questioned the masculinity of several candidates, but focused on former Solicitor General Florin Hilbay. Hilbay was standing to be Senator.

President Duterte’s standing on the issue of same-sex marriage has seemingly flip-flopped in recent years. During his presidential campaign in 2016, he claimed he was ‘open’ to legalizing same-sex marriage.

He later . Last year, he said he was open to civil unions.