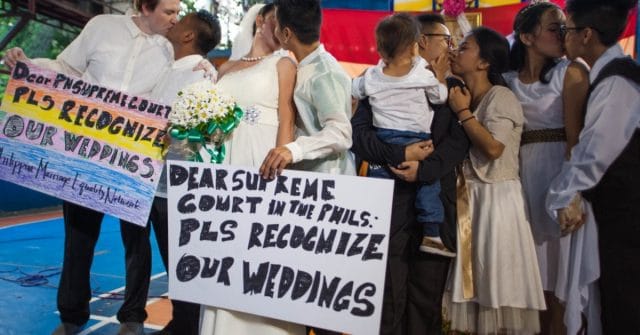 LGBT+ groups are criticising an online poll posted by congress in the Philippines asking if people are in favour of legalising same-sex unions in the country.

The poll, which is not a referendum or legally binding, was put up unannounced on the congress website to gauge public opinion on the civil partnership bill which is currently pending.

Currently there are no legal protections for LGBT+ people at a national level in the Philippines, and there is no legal recognition of same-sex relationships.

According to the Philippines’ leading media and entertainment organisation ABS-CBN “they skipped on calling the proposal a ‘same-sex marriage’ bill to respect religious sensibilities.”

“Among the provisions contained in the bill are a couple’s legal and civil rights, such as inheritance, custody over children, spousal benefits, and insurance and retirement benefits.”

If voting in the poll in support of the civil partnership bill, users must click an option saying “this will give equal civil rights to same-sex couples.”

However Filipino group LAGABLAB, a network LGBT+ organisations, individuals and allies, said: “The poll is not marriage, and it will not, in any way, be marriage equality.”

Similarly, if voting against the bill, the option users must click states: “I personally believe this is wrong.”

Following a general election on May 13, according to LAGABLAB, the current congress has only a week left before being replaced.

LAGABLAB posted on Facebook: “It becomes misleading and irresponsible to ask for public opinion on a nuanced issue with such inadequate information and narrow choices.

“Our Congress should not decide on our rights solely on the basis of personal opinions or mere online polls.”

The poll posted by congress in the Philippines.

Others on social media are encouraging people to vote, whether or not they believe the poll is valid.

As of 11am British summer time on Wednesday (May 22), more than 160,000 people have voted in the poll, with 48 percent voting for the civil unions, 51 percent voting against them and 1 percent undecided.

Others on social media are encouraging people to vote anyway.

Taiwan became the first country in Asia to legalise same-sex marriage on May 17.

The Metro Manila Pride March takes place on June 24, and LAGABLAB said in a statement: “We will once again conquer the streets with our LGBT family because there is hope and strength when we are together.”