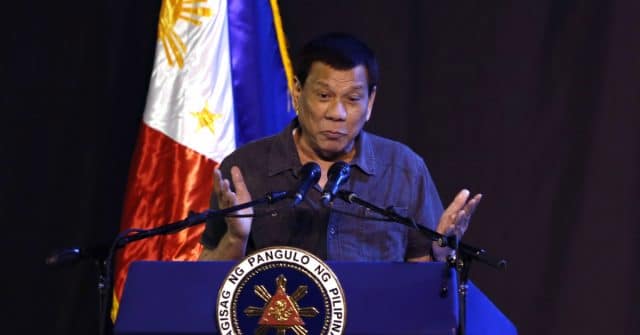 Philippines president Rodrigo Duterte joked he used to be gay until he was “cured” during a visit to Japan.

Addressing a Filipino community, local media reported that he made the remark as he asked the audience on whether his opponent, Senator Antonio Trillanes IV, is gay.

He then commented: “It’s a good thing I was able to cure myself.”

Conversion therapy is based on the belief that being lesbian, gay, bisexual or transgender is a mental illness that can be cured.

It has been widely discredited by medical experts for risking causing emotional and psychological damage.

Earlier this year, Duterte claimed his opposition candidates were homosexual in an attempt to smear their campaigns.

He took aim at former Solicitor General Florin Hilbay, who ran in the May 13 midterm elections as a senatorial candidate for the Otso Diretso opposition coalition.

According to the Manila Bulletin newspaper, Duterte hit out at him during a campaign event.

He said: “This son of a b***h Hilbay. He did nothing when he was solicitor general. He filled his office with homosexuals.”

Duterte said he was able to “cure” himself (Getty)

“He acts like a man and pretends that [actress] Agot is his girlfriend. Be true to yourself. You’re gay. Don’t hide behind a cover.

“You were made by God. God made a mistake. Just because he’s a God does not mean he is incapable of making mistakes.”

Addressing Trillanes, he said: “Is Trillanes a man or a woman? You don’t want to believe? Ask your gay friends. I challenge you.”

In February, Duterte faced criticism after claiming 40% of Communist rebel fighters in his country are gay.

The leader asked supporters at a campaign event in Laguna: “Did you know that 40 percent of NPA (New People’s Army) fighters are gay?”

The question referred to the armed wing of the country’s Communist Party, which has been labelled as a terrorist organisation by the Philippines and the US.

Duterte also claimed that the NPA once handed over hostages to his son, Sebastian Duterte, because they wanted to seduce him.