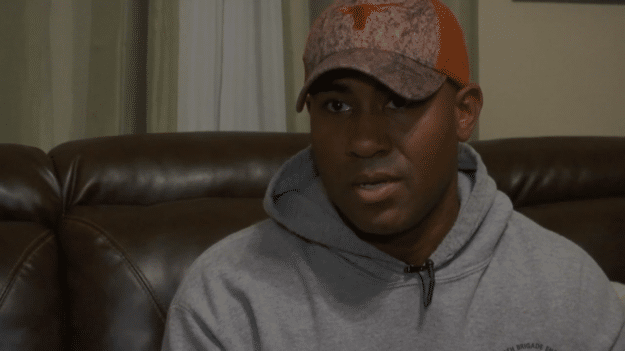 A Fort Bliss soldier says he’s the victim of a hate crime.

1st Sgt. Charles William Davis II has spent 19 years in service with the U.S. Army and is currently stationed at Fort Bliss.

Unfortunately, Davis recently experienced what he believes to be a hate crime while in celebration in town.

Davis gave KFOX14 his first hand account of the situation.

He says he was out celebrating on the night before New Year’s Eve with a friend named Julio.

Davis and Julio were at a bar on Cincinnati Street in West El Paso before trying to catch an Uber ride. At that point, four men approached the two.

“We went a little further down the street to catch the Uber and these guys were following and heckling – pretty much just trying to start a fight,” he said. “They kind of called me a faggot and, you know, cursed me out.”

While those four men eventually got in a car and drove away, two more men then came up to him.

“… They started asking me – inquiring about what happened, as if they were concerned or whatnot,” he said.

Davis says that it was the next moment that he really regrets. He told the two men that he was just trying to get home, but he also admits that he used the N word to do this.

“My mistake was to use the N-word, but you know, it’s colloquial language, so the guy I was talking to was black,” he said. “I’m black and I’ve never had a problem with another black guy getting upset in a very unprofessional environment.”

That’s when one of the men hit him, and the two started attacking him. Then, the four other men from before came back.

“Then the car that was up the street two blocks – they came back and those four guys jumped out of the vehicle and just started jumping me and Julio,” he said.

It seems one of hte men even pulled out a weapon.

“I don’t know what it was, but all I know is I reverted to pleading to him not to kill us,” Davis said.

“All of a sudden, this female comes out of nowhere and she asked those guys what they’re doing and they jumped back into their vehicle – all of them, like all six of them and then drove off,” he said.

While Davis says he doesn’t know who the men were, he has the suspicion that they were fellow service men.

After sustaining injuries from the fight, Davis and Julio spent a few days in the intensive care unit of a hospital.

Despite Davis thinking he was specifically targeted because he’s gay and black, the police investigation says that there’s no indication of a hate crime.

That said, police don’t want to comment on an on-going investigation outside of official statements.

But, Fort Bliss officials are also sharing their concern for the situation.

Fort Bliss officials released this statement: “On 1 January 2018 a 1SG Charles Davis, (D Co, 16th EN BN, 1 ABCT, 1 AD) was assaulted in El Paso. The 1st Armored Division and Fort Bliss is committed to working with civilian law enforcement to ensure that this assault perpetrated against one of our Soldiers is fully investigated and those responsible are brought to justice. As this recent assault occurred off-base the El Paso Police Department is lead in this investigation. Please contact the EPPD for details regarding this incident.”