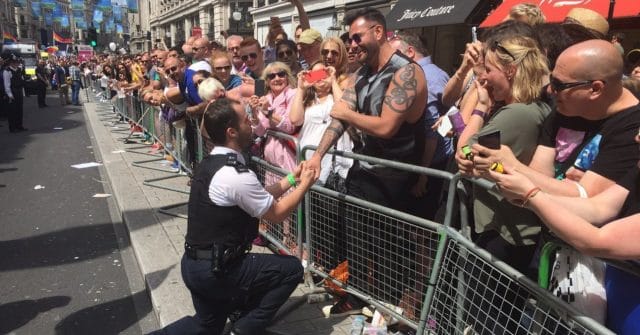 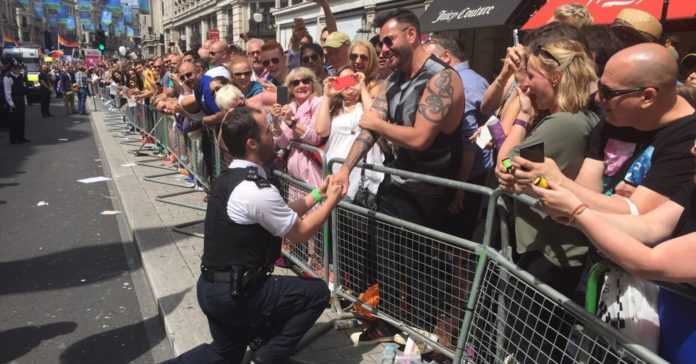 In a June 30 essay for The Guardian, Phil Adlem said he wasn’t prepared for the global attention he’d receive after he popped the question to fiancé Jonathan Sammons during London’s 2016 Pride festivities. A tweeted photo of the proposal received more than 4,000 likes, while video footage of the moment, as seen in the clip above, has been viewed over 45,000 times on YouTube.

Calling the experience of internet fame “unexpected and surreal,” Adlem said he hadn’t expected photos and video of his proposal to Sammons to take on a life of their own. When the video started to garner attention, he assumed it would stay “with the Pride bubble,” meaning that it would be received positively by all who viewed it. “I was on an emotional high in the immediate aftermath,” he wrote. “I had a wonderful fiancé and I was getting amazing messages of support from friends and colleagues.”

“My smile did not last long as I continued reading,” he recalled. Among the comments he said had been posted: “Both should be hanged till death,” “Absolutely disgusting” and “Don’t blame ISIS if they strike them!”

Worse still, the officer said he received a “hostile reaction” from a colleague, as well as a college friend. The responses brought to mind his earliest experiences with homophobia. “I was raised in a household which was staunchly anti-gay. On my 18th birthday, I went out with my ‘secret boyfriend’ and was the victim of a brutal homophobic attack,” he wrote,“in which I was dragged down a narrow alleyway by three men and severely beaten without a chance of defending myself. They did not stop until they were forced to by the police who arrived at the scene.”

“I am lucky to live in the UK, where I am not imprisoned or tortured for how I was born… Pride is an invaluable source of positivity and strength for anyone who has experienced abuse or bullying.”

Be sure to check out the rest of Adlem’s essay here.