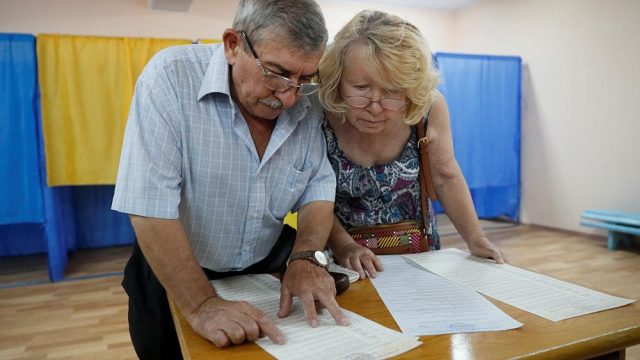 Polls opened in Ukraine on Sunday (July 21) for a snap parliamentary vote, three months after the former comedian Volodymyr Zelenskyi was elected president in a landslide victory.

The president’s party is expected to dominate the election. Polls opened at 7.00AM (6.00AM CEST) on Sunday morning and will close at

Zelenskiy is expected to cast his vote later on Sunday morning.

The party of Volodymyr Zelenskiy has extended its lead over other groups, according to polls published three days before parliamentary elections.

Zelenskiy, a TV comedian with no previous political experience, took the presidency in April on a platform of promising to crack down on corruption and lift living standards.

The parliamentary election was previously scheduled for October 27, but Zelenskiy dissolved parliament in April and called for an early election.

He is now hoping his Servant of the People party – named after the TV series in which he played a fictional, honest graft-fighting president – can give him control of parliament after Sunday’s vote.

Surveys by the Razumkov center non-government think-tank and the pollster Reiting showed his party with the support of 40.2% and 41.8% of voters – up from the 36.5% and 37.3%, respectively, recorded by the same pollsters in late June and early July.

The surveys show the next biggest party – the Opposition Platform party, which promotes restoration of ties with Russia – largely holding its ground through July with between 8.8% and 12.1%.

European Solidarity, the party of the previous president, Petro Poroshenko, was also hovering between 6.5% and 6.8%.