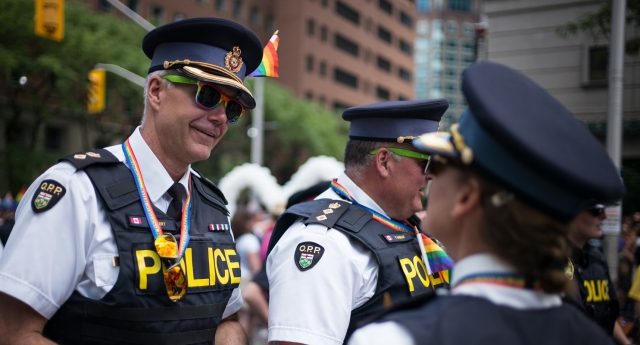 Pride Toronto has apologised for perceived “anti-blackness” and launched a process to consider whether to ban police units from marches, after demands from Black Lives Matter protesters.

In July, the Canadian city’s Pride parade ground to an unexpected halt when Black Lives Matter protesters disrupted the event, refusing to let the march continue until organisers agreed to a string of demands.

The group, who criticised the event’s alleged “anti-blackness” in an official statement, only agreed to let the parade continue when Pride Toronto organisers signed a “contract” that commits to more funding for minority events and the removal of police floats at future Prides.

In a statement this week, Pride Toronto apologised for its handling of the issue, but confirmed that after a series of consultations it would “assess” the further involvement of the police.

The statement confirmed it had entered a “Dispute Resolution Process (DRP)” involving the protesters, apologising for “a history of anti-blackness… that our organisation has continued”.

“When initiating the DRP we also have to recognise that a decision governing a group that can include as many as 400 marchers and 11 different law enforcement agencies is unique.

“Recognising that no one has asked or agreed to a full exclusion of this group – the DRP will however consider the nature of police participation.

“In the near term, Pride Toronto must begin the DRP process, working with BLMTO to present their concerns, appointing officers, and providing all feedback received to date on the issue for consideration.”

The claim that “no one has asked or agreed to a full exclusion of this group” appears inconsistent with the initial demands from BLM Toronto, which specifically called for “removal of police floats in the Pride marches/parades” and opposition to uniformed cops marching.

“While it wouldn’t be possible to accurately summarise the viewpoints expressed by all of you, the responses we received clearly demonstrate a very divided community.

“The LGBTTI2QQ2SA community is very diverse. Particularly in a city like Toronto, where our intersecting identities and lived experiences mean our experiences in this city are very different.

“While there are countless issues and causes where we can find common ground and celebrate together — there are many issues we struggle with greatly as a community.

“Race and gender are, perhaps not unlike the rest of society, clearly the issues with which our community has the greatest difficulty with.

“Pride Toronto wants to begin by apologising emphatically and unreservedly for its role in deepening the divisions in our community, for a history of anti-blackness and repeated marginalisation of the marginalised within our community that our organisation has continued.

“Pride Toronto regrets the way Black Lives Matter – Toronto Coalition’s (BLMTO) protest was handled by our organisation and the statements made following the Parade that did not represent our organisation.

“We apologise that the lack of decisive decision-making has left many in our communities feeling attacked. This is the opposite of what Pride is all about. There has been an unbelievable amount of racism expressed by members of our community through this organisation.

“Through this debate, all of you have turned to Pride Toronto for clear and decisive leadership and support through this issue and we have stayed quiet. For that, we are sorry.”

It adds: “Pride Toronto knew that for many years, the Black queer community has had to fight for their rightful place in the Pride festival—fight for space, fight for recognition and fight for support.

“Pride Toronto did not make enough of an effort to engage with members of our black community who have worked with the organisation for a very long time.

“We made decisions, like the location of programming by our Black Queer Youth coalition, without appropriate engagement or consultation with those affected.

“So, when we received these demands – we understood that they are reflective of a long and difficult history between Pride and Black queer communities, but now also understand them to be reflective of our current efforts, or lack thereof, to improve relationships with Pride’s black community, and other marginalised communities.

“For this lack of understanding, effort to address historic wrongs, and repetition of past mistakes, we are sorry.

“Pride Toronto remains committed to all of the demands agreed to and presented by BLMTO, Blackness Yes, Black Queer Youth, and others.

“We remain committed to demonstrating progress on each and every item and, as agreed, working with these groups to hold a public town hall this Winter to demonstrate progress and plans to deliver on these commitments.”