Home Gay Life ‘Prince Of Whales’: Trump Mocked For Insisting He Met With A Marine... 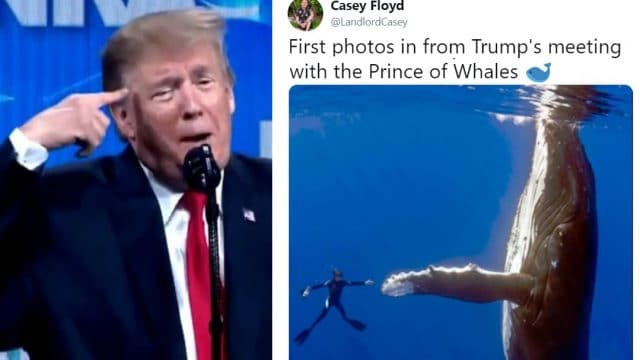 President Trump was widely mocked on social media Thursday for claiming to have had a meeting with a marine mammal last week.

In the tweet, Trump claimed to have met the “Prince of Whales” while on his recent trip to Europe, intending to refer to Prince of Wales, Prince Charles.

Trump also helpfully added “(U.K.)” after “Queen of England” while listing all of the world leaders he has recently met with.

Trump was ranting on Twitter about widely condemned comments he made to ABC News that he would be open to accepting dirt from foreign powers on his political opponents.

“I meet and talk to ‘foreign governments’ every day. I just met with the Queen of England (U.K.), the Prince of Whales, the P.M. of the United Kingdom, the P.M. of Ireland, the President of France and the President of Poland,” Trump tweeted. “We talked about ‘Everything!’ Should I immediately call the FBI about those calls and meetings? How ridiculous! I would never be trusted again. With that being said, my full answer is rarely played by the Fake News Media. They purposely leave out the part that matters.”

The tweet was quickly taken down. Trump then posted a new tweet with the correct spelling of Wales.

The Twitterverse had a whale of a time mocking the president’s tweet:

We now go live to Donald Trump’s meeting with the Prince of Whales pic.twitter.com/s57aDFUmZI