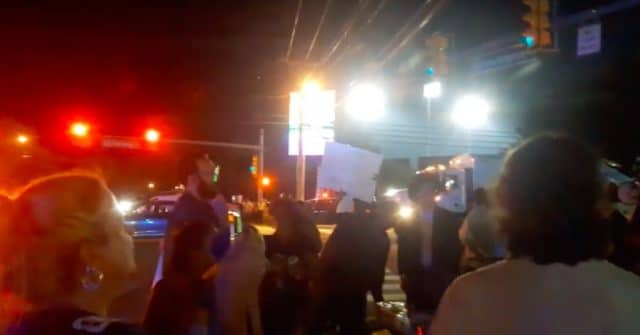 Last night, ultra-orthodox Jewish and Catholic protestors demonstrated outside of First Energy Park in Lakewood, New Jersey in opposition to the upcoming Saturday, June 8 Pride night to be held by the Lakewood BlueClaws, the city’s Minor League Baseball team.

The Pride night celebration at the park will include a giveaway of 1,500 caps embroidered with a rainbow BlueClaws logo.

According to Patch.com, ultra-orthodox Rabbi Yehuda Levin — “a rabbi from New York who made waves in the 1980s when he ran on an anti-abortion, anti-gay and anti-pornography platform against Ed Koch for mayor of New York City” — issued three videos over the last week blasting the BlueClaws and the Ocean County Library system for the “homosexualization of our community.”

Levin singled out the BlueClaws in particular as “low-life scum” for daring to hold “an abomination” Pride event on the Sabbath despite the town’s local ultra-orthodox Jewish community.

A flier created by a different man also urged others to attend last night’s protest. It read:

”This abomination must stop!!! Come out and protest!!! Our children are already bombarded in schools/media/entertainment with terrible anti-family brainwashing. Gay Pride events at family venues like sporting events, bowling alleys, malls, shopping centers or even Ocean County College. Do not sexualize kids at public events!!”

The protest was peaceful as uniformed and plain-clothes police kept the groups separated by a busy street. A BlueClaw sign outside of the stadium read “Baseball is for Everyone” with the team’s logo upon a rainbow background.

Here is video from the protest:

The scene at Thursday night’s protest and counterprotest near the Lakewood BlueClaws’ stadium.

Congregation B’nai Israel, a local conservative Jewish synagogue, has called Levin’s comments and the resulting protest “an ill-founded attack on personal freedom and individual rights, and universal acceptance of minorities.”

A statement from the synagogue, signed by four of its spiritual leaders, says:

“Our Movement recognizes and celebrates marriages, whether between partners of the same sex or the opposite sex…. Every person is created b’tzelem Elohim, in God’s image.”

”We cannot tolerate arbitrary discrimination against millions of Americans just because of who they are. Lesbian, gay, bisexual, and transgender (LGBT) people should be able to earn a living, provide for their families and contribute to society without fear that who they are or who they love could cost them a job.”

”We would encourage all to not support the ‘call to protest’ and instead speak out and fight against hate of any kind and embrace acceptance and love.”

Despite the protest, BlueClaws officials said their Pride Night event will go on as scheduled. A statement from the team read:

”We are committed to the idea that baseball is for everyone and all people are welcome at a BlueClaws game. It is unfortunate that some individuals are choosing to display intolerance rather than embrace the true spirit of the night. We look forward to BlueClaws Pride Night on Saturday.”